In recognition of his outstanding contributions to the art and industry of animation, the organizers of the Annecy Film Festival presented DreamWorks Animation’s CEO Jeffrey Katzenberg with the festival’s first ever “Golden Ticket,” a lifetime pass to the French animation festival. A long-time supporter of the event, Katzenberg was taken by surprise by the presentation.

The Golden Ticket was presented to Katzenberg at the end of the Keynote Masterclass with acclaimed director Guillermo del Toro, who provided the 1,000 attendees at the Grande Salle Bonlieu a preview of his upcoming series Trollhunters, produced by DreamWorks Animation for Netflix.

“Not only has Jeffrey been a long-time collaborator and supporter of all of us here in Annecy, his track-record in animation is nothing short of legendary,” said Annecy’s Artistic Director Marcel Jean, as he presented the award. “From reviving the industry with such critically acclaimed films like Beauty and The Beast, and The Lion King, to launching DreamWorks Animation and giving us such memorable characters in films like Shrek, Madagascar, Kung Fu Panda, and How to Train Your Dragon, there is no one more deserving of a lifetime pass to our festival.”

The Annecy festival opened Monday evening with a gala screening of The Red Turtle, and runs through June 18. (www.annecy.org) 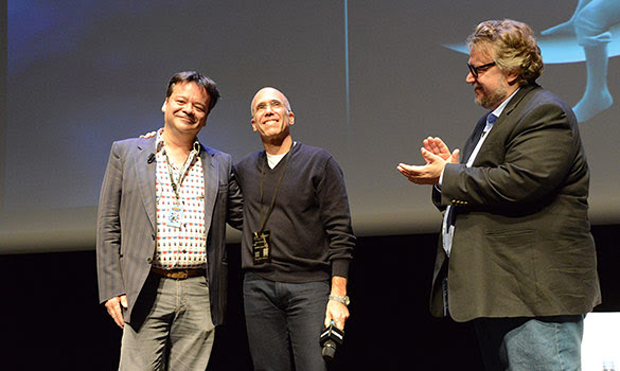