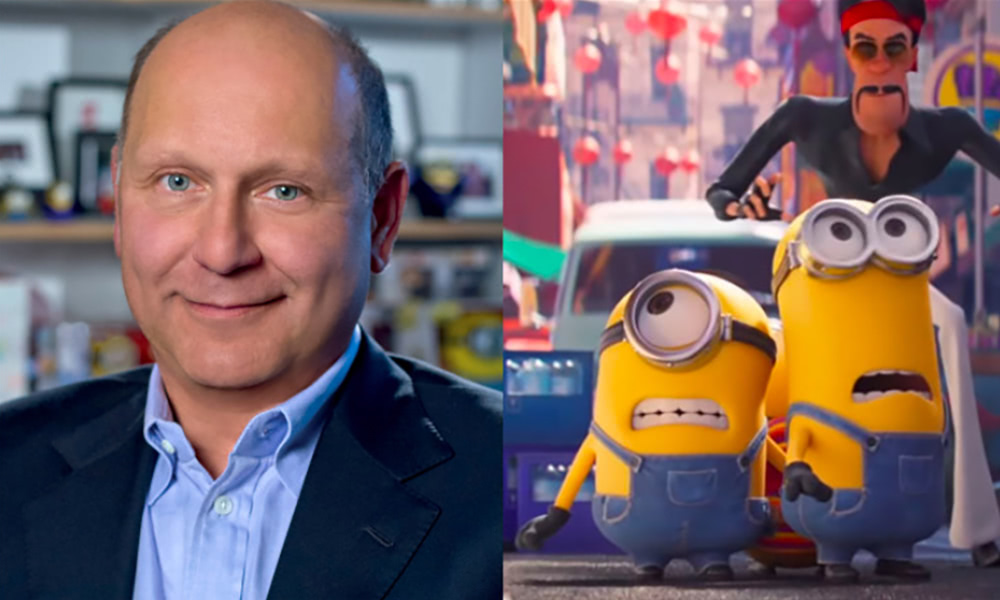 Chris Meledandri discussed his new movie Minions: The Rise of Gru at CineEuropa

Illumination founder and producer of the upcoming Minions: The Rise of Gru discussed his new movie, the importance of theatrical releases, and whether audiences would see same-sex kisses in his studio’s upcoming movies, as well as whether Chris Pratt makes a good Mario brother in an on-stage presentation at Barcelona’s CineEurope event today (June 20).

During the conversation with Deadline’s Mike Fleming Jr, Meledandri said that there were no plans to release The Rise of Gru on a streamer even though the film was originally set to be released in June 2020 release before its delay. “It was a unified point of view that we were going to wait it out for audiences to come back to the cinema. None of us knew it would be two years, but none of us blinked… I know where my heart lies, and it transcends whether or not a decision isn’t the best business decision in the moment. I think our global culture of cinema is at stake here.”

Meledandri also talked about the increase in audience demand for animation. “We’re in a much more competitive environment. Opportunities to seize the attention of the audience and deliver enough content that excites them to come to the theater progressively becomes more difficult. With digital messaging, you’re not getting 30 seconds, that has been challenging, but also triggers new creativity.”

When asked about whether Illumination will ever feature a same-sex kiss like Pixar’s Lightyear, the studio head said the question had not come up in his previous movies, but it’s something that will be relevant in upcoming films. “There are topics of conversation right now that are very relevant to what we’re doing in the future that get into areas that potentially might not please everyone,” he noted. “I think you have to honor the stories that you tell, honor the choices that your filmmakers make and you have to be willing to not have everybody pleased all the time… Universal is an exceptional partner when it comes to these types of issues.”

He added,  “The minute you start using the point of view of Twitter or the point of view of every single culture, no matter how intolerant they are, to guide your creative expression, I think you’re on a very slippery slope — not only morally, but creatively. It’s impossible to protect the creative process and still be trying to figure out how to thread a needle that’s never going to offend anybody.”

Meledandri also talked about the decision to have Chris Pratt voice the Italian character of Mario in the Super Mario Bros. Movie. “When people hear Chris Pratt’s performance, the criticism will evaporate, maybe not entirely — people love to voice opinions, as they should.I’m not sure this is the smartest defense, but as a person who has Italian-American heritage, I feel I can make that decision without worrying about offending Italians or Italian-Americans… I think we’re going to be just fine,” he responded.

The studio leader also looked back at his experiences with the Titan A.E. movie. “Losing $100M of Rupert Murdoch’s money is not fun, but the biggest lesson was how I dealt with the aftermath of it. I was seized with a tremendous amount of fear. I had to make a choice whether I was going to give in to that fear or stare it in the face and steer through it. It was not easy, it was one of the darkest party of my life… The key to whether or not you’re going to get crushed by them is not the failure itself failure — failure is part of the price of admission to success — it’s really whether or not you’re going to get swallowed up in fear.”