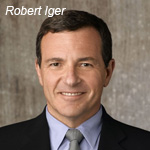 Disney Company CEO Robert Iger has added another 15 months to his contract after deciding against running for governor of California, says The Hollywood Reporter. Although Iger never publicly expressed his interest in the gubernatorial post, it was believed that he had political ambitions. Sources also said that he wanted to oversea the completion of Disney’s $3.7 billion theme park in Shanghai, which is looking at a 2016 opening date. It’s also said that Iger wanted to oversee the opening of Lucasfilm’s new Star Wars movie, which will be directed by J.J. Abrams.

Iger was originally expected to step down as CEO in March of 2015 and to serve as exec chairman until June 30, 2015. However, according to a regulatory filing, he will now stay in his current post until 2016.

The CEO’s base salary will remain unchanged and his targets, incentives and bonuses for fiscal 2016 will be the same as the ones applied in 2015. Iger earned $40 million in the most recent fiscal year (up 20% from 2011). Disney shares were up 76 percent in the same period.