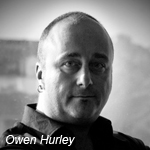 Owen Hurley has been named the new creative director of Technicolor’s Animation and Games group. Hurley will be based at Technicolor Digital Productions’ animation studio in Bangalore, India where he will oversee creative development. He will oversee the artistic and creative expertise of Technicolor’s studio in India and executing on its clients’ visions. He will also support the group’s original content development business. Reporting to the management team in Los Angeles, he will have oversight of the creative workflow among the various departments and the implementation of innovative solutions for the studio’s productions. He recently produced and directed Barbie in the Pink Shoes production for Mattel.

“Owen will be an invaluable member of our creative management team,” said Robert Winthrop, head of animation and games for Technicolor Digital Productions, “His wealth of production experience across a multitude of formats and genres, combined with his extensive leadership and project management skills, will serve to grow Technicolor’s Animation and Games unit by ensuring that our studio continues to surpass our clients’ creative and qualitative expectations.”

“I’ve enjoyed working with the Technicolor Animation and Games team in both Los Angeles and India,” added Hurley. “This group of talented and hard-working artists share my work ethic and commitment to innovative, high-quality animation. I’m excited to make the move to India and look forward to leading the continued growth of this flourishing animation studio.”

Prior to working with Technicolor, Hurley served as director of animation and cinematics with Vancouver-based Relic Entertainment from 2005 through 2010. He also directed episodes of Beast Wars, ReBoot, War Planets and Weird-Ohs as well as the world’s first computer animated direct-to-DVD movie, Casper’s Haunted Christmas during his time at Mainframe. Hurley directed the video debut of Barbie in 2001 with Barbie in The Nutcracker for Mattel Entertainment and went on to helm Barbie as Rapunzel and Barbie of Swan Lake as well.