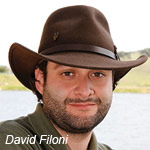 Veteran animator and supervising director of Star Wars: The Clone Wars discusses the digital evolution of his job.

In the eight years I had worked in animation, I had never once touched a computer related to my work. Everything I had worked on was traditional hand drawn animation, from my start on King of the Hill, to Avatar the Last Airbender, a pencil and paper were all I knew. Imagine my surprise when now, six years later, I am at the helm of one of the most digitally advanced television series ever produced, Star Wars: The Clone Wars. The journey from pencil to pixel has been extremely challenging, frustrating, and rewarding at different intervals. And the strange thing is, I still don’t know that much about computers.

In 2005, after finishing the first season of Avatar, I moved to San Francisco to start work on The Clone Wars. The only direction I received for the look of the show was to make it look like something no one had seen before. It seemed like a riddle, handed down to me by a Jedi Master. Make something no one had seen before, while using one of the best-known and beloved franchises of all time. On top of that, the whole series was going to be CG, and the main characters were mostly humans, or humanoid. They were Jedi, which meant they were heavy on the cloth, which is no friend to production. I knew very little about computers, but what little I did know, especially in 2005, indicated that humans would be difficult to pull off believably. I was also told that we would no longer be using storyboards of any kind; a new process of pre-visualization was being developed that would replace it. I had been a storyboard artist for a long time. It was my craft. It was what I knew, and it was not going to be a skill I could rely on for this show.

In the early days, design was still with pencil and paper and we began to work out how the characters might look. My main concern was that some of the graphic shapes in the designs might not work in three dimensions, especially when the characters were moving through extreme positions. We were incredibly fortunate to have a sculptor on staff, Darren Marshall, and he quickly knocked out some of the drawings in figure form. The digital modelers worked off those sculpts, but it was amazing how much harder and colder those models looked in comparison with the handmade sculptures. A computer edge is so precise. My hope was that by having texture artists paint the models, some spontaneity and personality would start to find its way back into the digital image. The background would share this look with a combination of set and projection, thus keeping some of the painterly look that I was more comfortable with from my 2D days.

Most of the early models were very stiff and wooden, but they had some life to them and we were at least curious about that. With every render, we learned what worked and what didn’t. Rather than come up with a plan to create the series one way, we treated every episode as a small film and applied the knowledge we gained to the next episode in the series. The production was less of an assembly line, and more a series of theories and experiments. We started to soften some of the edges and improve the pliability of the faces, which began to allow for a better range of motion and a more human feeling—while still keeping some of the harder angles and style. The characters were coming to life, they weren’t photorealistic by any means, but they weren’t a cartoon either, they were starting to live somewhere comfortably in between the two.

We were also reinventing the story phase of our production. Storyboards, even digital ones, were no longer being used. We instituted new software that allowed us to shoot on digital sets, blocking the characters as if it were live action. This allowed us to shoot coverage and dramatically change our editorial style, giving us greater heads and tails to work with. Our cameras were becoming more dimensional, and our editorial style moving closer to the live action Star Wars films. There was no longer a need to translate storyboards into a CG layout, the concept became one and the same. The digital file was the storyboard, it moved in real time, we could cut very precisely on every action on any frame. As a director, we now had total control over the composition and timing of every shot, in a way we never had before.

As we worked, the show became less of a struggle between 2D and 3D and it became more about the stories we were telling. We became less and less concerned with “if” we could do something, and just worried about how creative we could be. I never have to ask the crew of The Clone Wars to make something better—they always want to anyway. I’m incredibly lucky to work with people who take such pride in their work that they do every extra thing to ensure the work is good. Everyone works hard for a common goal.

I think even our earliest episodes were unique to TV animation, which was our original ambition. Now, entering our fourth season, I hope when you watch The Clone Wars, you will see things you’ve never seen before. Yes, there are still days when I think, “I could draw this so much faster,” and then there are days when I am amazed at the extraordinary things we are able to create in a CG environment. I’ve come to realize that I don’t have to worry about the limitations of the tools anymore, because there really are no limitations. The only limitations are in your mind.

Dave Filoni is the supervising director and episodic director of Cartoon Network’s Star Wars: The Clone Wars, which begins its fourth season on Sept. 16 at 8 p.m.