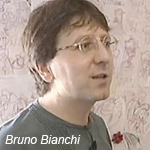 We were saddened to receive the news of the death of leading French TV animator Bruno Bianchi this morning at the age of 56. Bianchi, who helped create the popular Inspector Gadget with DIC founder Andy Heyward in the early 1980s, also worked on a long list of Saban and S.I.P. Animation international shows as writer, director, producer and artist. He also founded the studio Gingko in 2008 after the closure of S.I.P. studio.

Known for his love for fun gags and affable sense of humor, Bianchi worked on series such as MASK, W.I.T.C.H. Gadget and the Gadgetinis, Heathcliff, Jayce and the Wheeled Warriors, Beverly Hills Teens, Diplodo, Princess Sissi and Iznogoud during the ’80s, ’90s and early 2000s.

Services will be held on Tuesday (Dec. 6) at Le Père Lachaise cemetery in Paris.

Here is a video interview with Bianchi as he gets ready for the return of Inspector Gadget to the screen about ten years ago.