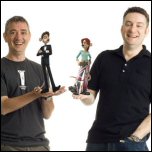 Flushed Away, the latest big-screen animated feature from DreamWorks Animation and Aardman Animations has finally made it theaters after more than three years of hard work from both camps. We recently had the opportunity to sit down with the film’s directors, Sam Fell and David Bowers, to hear some of their observations on various aspects of making the film.

Sam Fell: We knew what Aardman films looked like from Wallace & Gromit and Chicken Run, so we had a point of reference for ourselves and the team here at DreamWorks. Happily, the team here is an amazing team’incredibly talented technicians, artists and they just loved Walace & Gromit and really pulled it off. We knew we could technically execute the Aardman style, but we didn’t know whether the spirit of Aardman would come through. It’s quite an abstract thing, but everyone here got it

David Bowers: If you look at the DreamWorks movies, they’re very diverse styles. Looking at Shrek, Madagascar and Shark Tale, they all seem very different so we didn’t doubt that they could match the Aardman style for a second.

We did early tests and one of the first things we did is we just got a warehouse over in Bristol in England and filled it full of junk’old furniture and trash and stuff and built a piece of our world, a set, out of this stuff. We painted it, lit it and set-dressed it and got into all the details of what the rats would have done and shot it so we know how it would have worked if we’d done it at Aardman. Then we took all that reference and information and we brought it over here and the guys recreated the set in the computer. They created it perfectly. You’d look at the two next to each other and you couldn’t tell the difference, so we knew very early on that it was all going to be okay.

DB: For a while we worried about it because we didn’t want to make a film that appealed to a small audience but we wanted a film that felt British. A lot of British things travel very well. The Harry Potter films feel very British, Narnia feels British and Lord of the Rings feel sort of British in their way. But there was a time we got nervous and started pulling back some of the expressions and we noticed it became a bit less interesting, so we put them all back. Things like someone saying ‘You plonker!’ I don’t know what it means, but it sounds funny.

We also wanted to make it very modern. The Walace & Gromit films are amazing but you can’t get away from the fact that they’re set in a vary specific part of the north of England and even though they’re modern-day, they’re sort of stuck in post-war and are bit old-fashioned that way.

SF: We love that style, but we wanted to do our own version.

DB: We toured the sewers of London. We were kind of hoping for nice, big company trip somewhere exotic but we ended up in the drains. We found that there wasn’t much there. We got our hazmat suits on and it was warm and smelly but there wasn’t much to look at. We looked at it and said that we were going to make our world the exact opposite of that. We wanted to make it lighter and beautiful. As Roddy is in the movie, we want the audience to be surprised when they get down there.

SF: It’s kind of a joke how wonderful it is, really. We made sure there’s plenty of daylight coming so there’s day and night and there’s light in the water and lots plants growing. So we kind of made it fantastically romantic. That’s kind of the point of the film. Roddy’s world in the beginning is very affluent but sterile and he ends up coming to thei world that is no so affluent but still very rich.

SF: We couldn’t do that in stop-frame, really. The computer solved all that and we spent a lot of time developing it with the effects people here but we’ve chosen not to make it too flashy. We’ve chosen to keep the water kind of simple and go for a kind of painterly look to it. We could have gotten more carried away with the technology but we actually kept it back. That’s been one of the rules in taking Aardman’s style into the computer’retaining the simplicity.

SF: The animation’s not really much quicker in CG. The computers bring a bigger canvas, but in terms of the process, I think it’s taken about the same amount of time to make this film as it did Wallace & Gromit.

DB: Stop-frame animation is time consuming when you’re moving a frame at a time but it’s done on real sets with a real camera and once the animator finishes, the shot is done and you can project it the next day. With us, when the animator’s finished it has to go through so many other departments.

DB: On Shrek, the animators will animate the character’s head moving and the computer will figure out what the hair does, for example. But in stop-frame animation or traditional 2D animation, the animators do the hair themselves and it has its own creative reality that just feels authentic.

SF: Yeah, somebody has to think about it.

DB: We got the clay-like hair look. I think we went back and looked at things like Chicken Run an the kind of hair the farmers have. It’s a good graphic representation of what hair could be.

SF: It’s not a realism thing, we weren’t really into that. Although, in terms of modeling and texturing, we wanted it to be real and feel very tactile because I thnk that’s a key to the Aardman look as well. You feel as though you can take them home, those puppets.

SF: We definitely tried to avoid it. If you need it, then it’s a good thing but we didn’t want to be tempted into a lot of that stuff, in all departments. The camera is another place where we didn’t want to do all these super flashy, complex CG camera moves but actually wanted quite an elegant camera style that ws kind of discrete and allowed the acting and comedy to come through.

DB: That’s true with the character design as well, not putting fur on them for example. The character designs we have are kind of like a blank canvas and the acting has to be very pure because you’re working with such simple elements. You ca be subtle and not rely on all this extra stuff to get you through it. You just gotta be good.

SF: I remember going to see Ray Harryhausen [movies] when I was a kid and just the magic of that stuff. I especially liked seeing 3D in stop-frame animation. My first films were just Super 8 and shooting thing just moving, not even with a story in particular, but just the magic of it grabbed me.

DB: I was brought up on Disney movies and have always loved the classics. I ended up falling into animation on Who Framed Roger Rabbit and I just enjoyed it and never left.