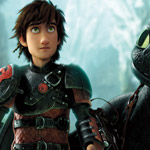 Deadline has revealed that Oscar-winning actor F. Murray Abraham (Amadeus, The Grand Budapest Hotel) will be voicing the villain “Grimmel” in upcoming DreamWorks Animation sequel How to Train Your Dragon 3. Universal is releasing the picture March 1, 2019.

While Abraham has previously provided some voice-over and narration work for other projects, he has only recently gotten into the animated character game. He is set to voice “Jupiter” in Wes Anderson’s upcoming Isle of Dogs.

The celebrated actor — whose 100-plus credits range from Scarface to Muppets from Space — will join established Dragon stars Jay Baruchel, America Ferrera, Kristen Wiig, T.J. Miller, Jonah Hill, et al in the new adventure of Hiccup, Toothless and their dragon-riding pals. Cate Blanchett, Djimon Hounsou and Kit Harrington are also reportedly returning to voice their roles from the second film.

Dean DeBlois returns for a third time as director; he is also filling story/screenplay and exec producer roles. Bonnie Arnold is producing.

Based on the books by Cressida Cowell, the first How to Train Your Dragons movie opened in 2010, pulling in nearly $495 million in worldwide box office. The second (2014) added $621.5M. The toon franchise encompasses several short films, hit TV series and games.