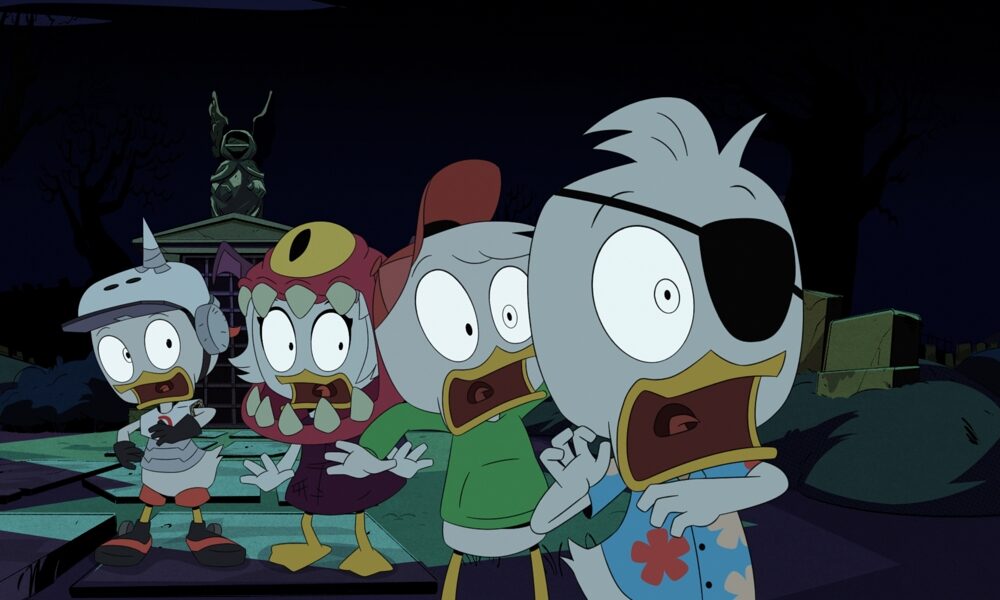 The third season of Emmy Award-winning animated update series DuckTales launched earlier this month on Disney XD and DisneyNOW, kicking off all new adventures for the triplets, Uncle Scrooge, Webby and the rest of the flock.

The season premiere episode, “Challenge of the Senior Junior Woodchucks” (guest starring Stephen Root as a talking guide book) follows Huey and Violet in competition to earn the top scout title. The show took a brief moment to sprinkle in some character diversity, placing two supportive parents wearing matching “I’m With Dad” shirts behind Violet when she accepted her award. In the episode, Lena refers to her friend as “my sister from a couple misters.”

“… We had a lot of conversations about who Violet was and what her background was and came up with this fun notion of her too enthusiastic, overly supportive dads who love being dads. We didn’t really have a story built around them, but when the time came for an episode focusing on Huey and Violet in a particular situation, it made sense that they would be there … But I’m well aware that the ‘queer representation through parents and background characters’ trope is an issue …

“We’ve done pretty well on racial diversity and representation of people with limb differences, but we really have not done enough relevant LGBTQ+ rep. We do have some themes and ideas coming up that address relevant LGBTQ+ narratives. But there’s always opportunity for a lot more…”

While Angones was concerned about lack of representation, the appearance of Violet’s dads was enough to cause a reaction from One Million Moms — a subsidiary of the American Family Association, a Southern Poverty Law Center designated anti-LGBTQ+ hate group.

OMM director Monica Cole, who previously targeted Toy Story 4, PBS’s Arthur and Pixar’s Onward (which featured the studio’s first openly gay character) over LGBTQ+ representation — as well as Disney TV’s The Owl House for being “demonic” — called for a boycott on Disney on Friday.

She wrote: “WARNING! DuckTales is not the same cartoon parents grew up watching. Disney has introduced a male couple as the parents of two characters in the reboot of its popular DuckTales, rated TV-Y.”

“It is apparent that this particular producer is not finished with indoctrinating children by exposing them to homosexual relationships through a facade of normalcy,” Cole added in reference to Angones’ blog post. “If anyone still has any doubt on where Disney stands on this controversial issue, hopefully this makes it clear that there is an LGBTQ agenda they are forcing on young audiences.”

It is unclear how many supporters One Million Moms actually represents. The self-described Christian network currently has 4,784 followers on Twitter; the no-DuckTales pledge addressed to CEO Bob Chapek has just under 9,700 signatures, according to OMM’s website.

According to the UCLA School of Law Williams Institute, which tracks legal issues affecting LGBT people in the United States, There are 700,000 co-habitating same-sex couples in the U.S.; 114,000 of these couples are raising children under 18, and 24% of parents are raising foster or adopted children.