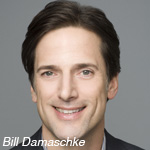 Damaschke previously was co-president of production for feature animation, and oversaw the studio’s successful 2010 releases: How to Train Your Dragon, Shrek Forever After and Megamind. Those films have grossed more than $1.5 billion worldwide. Damaschke’s previous post will not be filled.

“Now that our ambition has grown into five movies every two years, we really need the focus of somebody who is giving 100 percent of their time to the creative direction and the creative leadership of the company,” DreamWorks CEO Jeffrey Katzenberg told the trade paper. “I give so much of the credit of the success we’ve been having creatively to his leadership.”

You may also like...
Related Topics:Bill Damaschke, DreamWorks Animation, How to Train Your Dragon, Jeffrey Katzenberg, MegaMind, Shrek Forever After