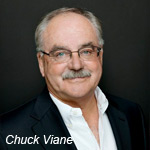 “In addition to being a truly great guy, Chuck is one of the smartest, most experienced and respected leaders in the industry and I don’t know of anyone with a deeper understanding of the movie landscape, its trends and its future,” said DreamWorks Animation Chief Executive Officer Jeffrey Katzenberg. “At this strategic moment in time for DreamWorks Animation, I am confident that he will serve as an invaluable resource.”

“I’ve known Jeffrey Katzenberg for 26 years and he was a close colleague of mine during our time together at Disney,” said Viane. “Under his leadership, I believe that DreamWorks Animation has truly become a studio for the 21st Century and I look forward to helping shape their future distribution strategy.”

Viane previously served as President of Global Distribution for Walt Disney Studios Motion Pictures. Prior to Viane’s distinguished 25-year career with Disney, from which he retired early this year, he served as Vice President and Head Buyer for General Cinema Theater Corp. He will help DreamWorks Animation find a possible new distribution partner after its contract with Paramount ends in 2012.