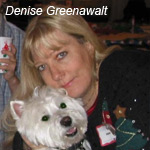 We were saddened by the recent death of longtime Disney publicity exec Denise Greenawalt who passed away in her sleep following a long illness May 22 at Huntington Hospital in Pasadena. She was 52.

During her 16-year tenure with Disney, Greenawalt played a key role in developing and implementing publicity campaigns for many of the studio’s biggest animated hits including The Lion King, Toy Story and Toy Story 2, and Beauty and the Beast. She also helped launch such major Touchstone Pictures/Jerry Bruckheimer Films blockbusters as Armageddon, The Rock, Con Air and Pearl Harbor. She retired from Disney for health reasons in 2002.

“All of us at Pixar and Disney, and in the animation industry, have lost a true friend and a great supporter,” said John Lasseter, chief creative officer of Pixar and Disney Animation Studios. “Denise worked tirelessly and enthusiastically to publicize our films and always went above and beyond the call of duty to get the word out about our new releases. She was smart, funny and full of great ideas when it came to publicity. Denise was an important part of the animation renaissance at Disney.”

Thomas Schumacher, president of Disney Theatrical Group and former head of Disney Animation, said she “was the rarest of combinations: deeply sensitive and compassionate while also relentless and determined. … She carried the torch of Disney Animation with astounding grace and passion.”

Born in Philadelphia on Sept. 23, 1960, Greenawalt attended Loyola Marymount’s School of Film and Television and later received her MBA from UCLA. She went to work at public relations firm Rogers & Cowan while pursuing her dream job at Disney. In 1986, she was hired as an assistant for Disney Studios’ field publicity department and in 1994 was named VP of national publicity.

“Denise was a force to be reckoned with and as smart as they come,” said Dick Cook, former Disney Studios chairman. “I can’t think of any publicity executive more tenacious, talented and driven than she.”

In addition to her numerous professional accomplishments, she was a humanitarian. In 2003, her late Westie, Trevor, received his Therapy Dog Certification, and the two would visit Huntington Hospital patients twice a week. Greenawalt also volunteered for Elton John’s Aids Foundation as well as the La Canada (Calif.) Thursday Club, where she was in charge of the debutante program.

“The most beautiful and courageous woman,” John said. “She was an inspiration.”

Greenawalt also was a member of ASIFA (the home of the Annie Awards), Women in Film and the Publicists Guild of America, where she and the Disney PR team were honored with the Maxwell Weinberg Showmanship Award for their work on Beauty and the Beast and Aladdin. She was honored by her peers at the guild in 1997 with a special award of merit.

“She was small in stature, but that was where small ended,” said veteran Disney animation producer and filmmaker Don Hahn. “The rest of Denise was expansive, passionate and overflowing with her infectious love of movies and the people who made them. She was like family to rock stars, movie stars, busy executives and geeky guys who animated Mermaids, Beasts and Flying Carpet rides. We were her biggest fans, and she was our sweet, tenacious, dog-loving, Hummer-driving, little sister whom we will always love and never forget.”

Survivors include her mother Doris “Dotty” Greenawalt, her brother David and her 2-year-old Westie, Charlie. A mass will be held at 10 a.m. Saturday at St. Bede the Venerable in La Canada Flintridge. Interment will follow at Forest Lawn in Glendale. Donations can be made in her name to the Huntington Hospital Pet Assisted Therapy program at (626) 397-5208.