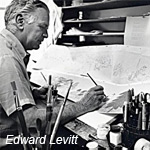 Edward Levitt, a background painter for Walt Disney Animation Studios during animation’s Golden Age and a key influence on the Cartoon Modern movement of the 1950s, died April 2 in Palmdale, California. He was 96 years old, Cartoon Brew reports.

Born in New York City April 17, 1916, Levitt grew up on the East Coast before his family moved to Los Angeles in the mid-‘30s. After graduating from high school, Levitt applied for a job with Disney in 1937 and was hired to do rotoscope tracing for Snow White and the Seven Dwarfs. By the end of production, his apparent talents has shifted him to the background painting department. He went on to work as a background artist on Pinocchio, Bambi and the “Rite of Spring” segment for Fantasia. Levitt participated in the Disney strike of ’41, returning after settlement to work on Victory Through Air Power before leaving once more to enlist in the Marine Corps, for whom he made training films as a member of the Marine Corps Photographic Section in Quantico.

After the war, Levitt partnered with other former Disney artists to form the Cinemette studio, which created industrial films as well as shorts and commercials. In 1948 he directed the political UN-backed film Grass Roots and produced the animated anti-nuclear short Where Will You Hide? Levitt’s style was greatly sought after in the 1950s for commercials and commissioned films. During this period Levitt freelanced for almost every major studio in L.A., and worked closely with Bill Melendez on Peanuts Ford commercials at Playhouse Pictures; Melendez later hired him when he opened his studio in 1964, where he was a key designer on A Charlie Brown Christmas. Most of the ‘60s saw Levitt hard at work on Peanuts specials as well as Babar specials, and features Gay Purr-ee and The Incredible Mr. Limpet. Levitt retired in the early ‘70s to become a full-time rancher and orchard owner.

Levitt is predeceased by his wife, Dorothy. He is survived by his brother, sister, four children and many grandchildren and great-grandchildren. The family has requested that in lieu of flowers, donations may be made in his name to the Motion Picture & Television Country House and Hospital. 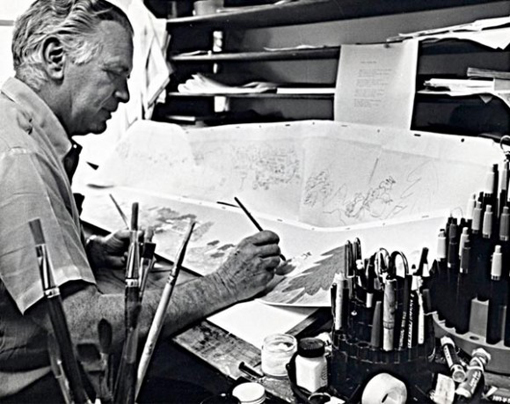