Born in Melbourne in the 1920s, Armitage served with the Royal Australian Air Force during World War II before attending art school. He left formal studies after winning an international art competition and moved to Mexico City, where he apprenticed with muralist David Alfaro Siqueiros. Armitage moved to Los Angeles in 1952 nearly flat broke but quickly signed on with Walt Disney Studios, where he would work on some of the greatest mid-century animated features.

Armitage began working at Disney as an animator on Lady and the Tramp, but found his niche putting his muralist training to work as a background painter for Peter Pan (1953), Sleeping Beauty (1959), Mary Poppins (1964) and The Jungle Book (1967). He left the studio after The Jungle Book and went on to a production illustration gig on the two-time Oscar winning sci-fi film Fantastic Voyage, which made use of his expertise in anatomical drawing.

In 1977, Armitage returned to Disney — this time as an Imagineer. He had worked on projects around Disneyland in the 1950s, but now took on much larger tasks. These included the Wonders of Life Pavilion in Epcot, 5,500 square feet of murals for Disney World’s Safari Fare Restaurant, and several mural for Tokyo DisneySea. He retired from the company in 1989.

Post-Disney, Armitage continued to put his creativity and anatomical knack to diverse uses. He studied Eastern medicine and traveled to China to learn acupuncture, later making a large donation of his medical artwork to University of Illinois at Chicago. He also donated several oil pencil drawings of gorillas to raise funds for gorilla and great ape conservation. In Paso Robles, he and his wife (and fellow retired Imagineer) Karen Connolly Armitage ran an architectural design business, and Armitage continued to create paintings and murals for private homes.

Frank Armitage was awarded the title of Disney Legend in 2009.

The well-traveled and accomplished artist is survived by his daughters Nicole Armitage Doolittle, also a Disney Imagineer, and scenic artist Michelle Armitage; by his son Wes, his stepchildren Tracy and Cecil, wife of 33 years Karen Connolly Armitage, and his sister Margaret. Donations in his name can be made to the Ryman Arts Foundation, Liga International or the University of Illinois at Chicago BVIS program to support students in the biomedical visualization masters program. 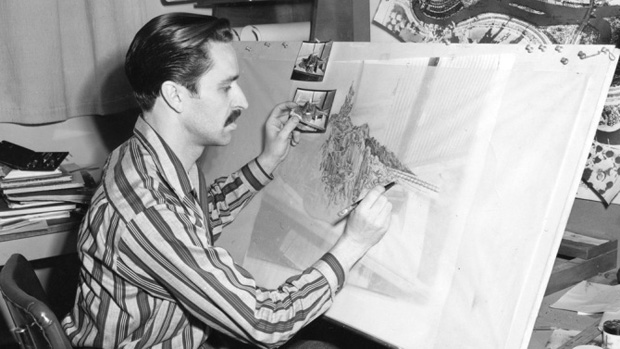