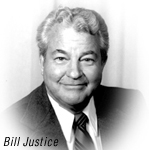 Bill Justice, one of the legends of Walt Disney animation and imagineering who contributed to 57 short films and 19 features, died in Santa Monica of natural causes. He was 97.

Justice was born in Dayton, Ohio, on Feb. 9, 1914, and grew up in Indianapolis. He graduated from the John Herron Art Institute in 1935 and joined Walt Disney Studios as an animator in 1937. Among the projects he worked on are Fantasia, Saludos Amigos, Victory Through Air Power, The Three Caballeros, Make Mine Music, Alice in Wonderland and Peter Pan.

He directed several Oscar-nominated experimental short films in the 1950s, including Noah’s Ark, A Symposium On Popular Songs and The Truth About Mother Goose. He also worked in stop motion, creating with Xavier Atencio and T. Hee, sequences for The Parent Trap and Mary Poppins.

Disney himself asked Justice to join Walt Disney Imagineering in 1965, a job at which he programmed audio animatronics figures for such Disneyland rides as Great Moments with Mr. Lincoln, Mission to Mars, Pirates of the Caribbean, Haunted Mansion, Country Bear Jamboree and America Sings. He also helped bring to life characters for  the Hall of Presidents attraction in Walt Disney World,  masterminded the Mickey Mouse Revue featured at Walt Disney World and later, Tokyo Disneyland.

After 42 years with the Walt Disney Company, Justice retired in February 1979. He wrote a book about his Disney years called Justice for Disney, and was often a guest at Disneyana conventions. Bill is survived by his daughters, Melissa and Marissa Justice, both of Burbank.

You may also like...
Related Topics:Bill Justice, Disney, obits