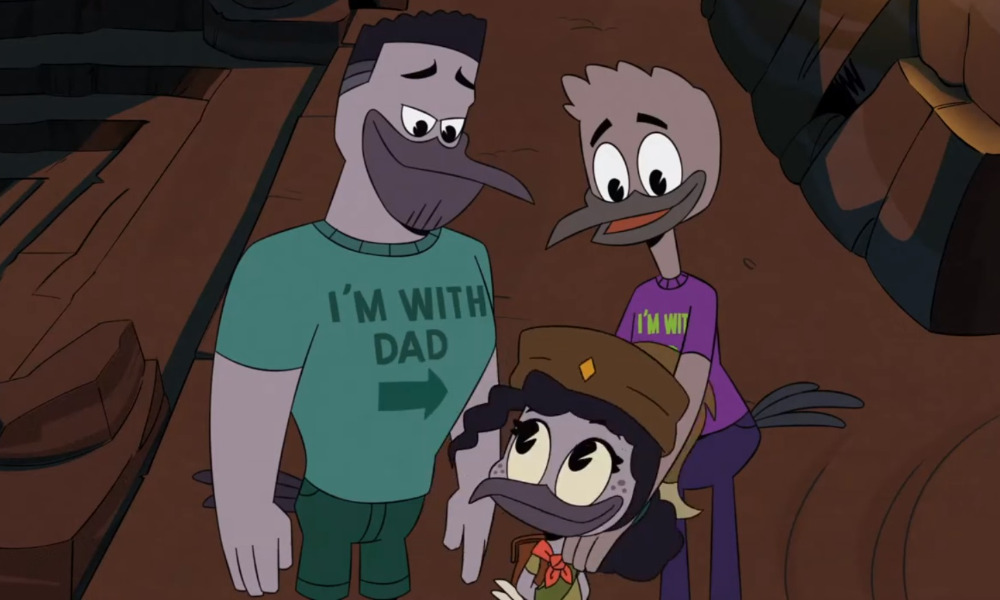 A S3 episode of DuckTales briefly introduced Violet's parents, making her the first Disney TV character with gay fathers. An anti-LGBTQ+ hate group called for a boycott after the episode aired.

After impassioned responses from its employees, creators and the wider animation community, The Walt Disney Company is trying to make up for its fumble on Florida’s “Don’t Say Gay” bill, which passed the Republican-controlled House and Senate and is expected to be signed into law by Rep. Governor Ron DeSantis.

CEO Bob Chapek, whose initial internal memo on the issue “rang hollow” for employees and inspired “immense disappointment” for The Animation Guild, has issued a new apology and outlined key actions the company plans to take. The chief exec noted that hearing from Disney Co.’s LGBTQ+ community helped him “better understand how painful [Disney’s] silence was” and promised to be “an outspoken champion” for their rights.

The company was strongly criticized for having donated to politicians who went on to back the bill (as well as some who opposed it). After Disney’s planned make-good donation to The Human Rights Campaign, announced by Chapek in a meeting with shareholders earlier this week, was declined with wishes for the company to take firmer action, the new memo says WDC is increasing support for LGBTQ+ advocacy groups around the country, and pausing all political donations in Florida.

The memo reads in full:

“To my fellow colleagues, but especially our LGBTQ+ community,

Thank you to all who have reached out to me sharing your pain, frustration and sadness over the company’s response to the Florida ‘Don’t Say Gay’ bill. Speaking to you, reading your messages, and meeting with you have helped me better understand how painful our silence was. It is clear that this is not just an issue about a bill in Florida, but instead yet another challenge to basic human rights. You needed me to be a stronger ally in the fight for equal rights and I let you down. I am sorry.

Our employees see the power of this great company as an opportunity to do good. I agree. Yes, we need to use our influence to promote that good by telling inclusive stories, but also by standing up for the rights of all.

Starting immediately, we are increasing our support for advocacy groups to combat similar legislation in other states. We are hard at work creating a new framework for our political giving that will ensure our advocacy better reflects our values. And today, we are pausing all political donations in the state of Florida pending this review. But, I know there is so much more work to be done. I am committed to this work and to you all, and will continue to engage with the LGBTQ+ community so that I can become a better ally. You will hear more about our progress in the coming weeks.

I truly believe we are an infinitely better and stronger company because of our LGBTQ+ community. I missed the mark in this case but am an ally you can count on — and I will be an outspoken champion for the protections, visibility, and opportunity you deserve.