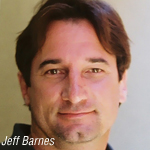 Barnes will assume the title of  VP and general manager of stereo visual-effects production and work with filmmakers to optimize stereo 3D digital production .

“Stereo is a powerful medium for storytelling,” said Barnes. “Digital Domain understands that 3D conversion is not an afterthought or a standalone process — it’s most effective when it’s part of the initial shot design, as it’s essentially a visual effect. I’m excited to join a company with Digital Domain’s depth and expertise in digital production, as well as in artistic and technical talent.”

As a visual effects producer and production executive, Barnes’ credits span more than 85 films including Alice in Wonderland, Harry Potter and the Forbidden Journey, G.I. Joe: The Rise of Cobra, Evan Almighty, Spider-Man 3, Ghost Rider, The Departed, Pan’s Labyrinth, King Kong, Memoirs of a Geisha, Mr. and Mrs. Smith, Sin City and The Aviator. He was also executive producer on Sententia Entertainment’s feature film Danika, and served as a production executive on Guillermo del Toro’s feature Pan’s Labyrinth, which received three Academy Awards and was produced in association with Sententia. He is a member of the board of directors of the Visual Effects Society.