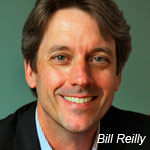 In addition to the hire of Reilly as EP, the studio has also announced the opening of an office in Santa Monica, the first outside New York in its 18-year history and has named new representation for the East Coast.  The new office will provide a base of operations for the studio’s growing involvement in feature film, TV programming and other entertainment projects, as well as service the work of its West Coast-based directors. Reilly will divide his time between the New York and Santa Monica offices of Curious.

According to Korberlin, the moves are in response to changes in the studio’s historical positioning of being a New York-based animation house. The studio is now producing a network pilot and is working on various development projects for both advertising and entertainment. The workload has increasingly seen Curious’ producers and directors traveling to California for meetings and shoots, making the L.A. office a needed outpost to complement the work of its New York studio. That’s where the bulk of its staff of 150 producers, directors, animators, CG artists and other specialists are based, working out of a 30,000 square foot studio.