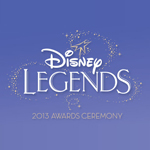 At the premiere Disney fan event, D23 Expo, taking place in Anaheim, Calif. from August 9-11, the organizers will celebrate this year’s crop of inducted Disney Legends at a 2 p.m. ceremony on August 10 in the Expo Arena of the Anaheim Convention Center. Among the 2013 honorees are Monsters, Inc. and Monsters University stars Billy Crystal and John Goodman, technology visionary Steve Jobs and television icon Dick Clark. Each honoree receives a Disney Legends sculpture and will participate in a handprint ceremony, with their bronzed prints destined for the Disney Legends Plaza at the company’s Burbank headquarters.

“The Disney Legend Award is our highest and most coveted honor,” said Disney Chairman and CEO Bob Iger. “It’s reserved for the extraordinary visionaries and artists behind the Disney magic, the men and women who push the limits of innovation and creativity to ensure Disney remains truly special. The eight Legends we honor this year helped create some of our most beloved characters along with exciting new worlds and thrilling attractions. They also entertained millions of people and expanded our definition of what’s possible. They are all indelible parts of our legacy, and we are proud to recognize them as true Disney Legends.”

Admission to the ceremony is first come, first served and is included in the price of an Expo ticket. The ceremony will also be simulcast in the overflow theater inside the Convention Center.

Tony Baxter: Developer of beloved Disney parks attractions including Big Thunder Mountain Railroad, Journey Into Imagination, Splash Mountain and many others over his 43-year career with Walt Disney Imagineering.

Collin Campbell: A part of the Disney legacy in nearly every aspect, from animated features to work with Imagineering developing Enchanted Tiki Room, Pirates of the Caribbean and creating concept illustrations for Magic Kingdom Park and Epcot Center.

Billy Crystal: Winner of six Emmy Awards and one Tony, the acclaimed actor is known to Disney-Pixar fans as the voice of cyclopean green monster Mike from Monsters, Inc. and this year’s Monsters University. He has also been a fixture of ABC television, where he hosted the Academy Awards nine times.

John Goodman: Celebrated stage and screen actor and voice of James P. “Sully” Sullivan from the Monsters films. He has also had many notable live-action roles in The Big Lebowski, The Flintstones, Oh Brother, Where Art Thou and recently Argo and Flight.

Steve Jobs: World-renowned game changer for the consumer electronics industry, the Apple founder was an early investor and chief executive of Pixar, and became the largest shareholder in Walt Disney Company overnight when the Mouse House acquired Pixar Animation Studios seven years ago. He also joined the Disney board of directors and remained a valuable advisor until his passing in 2011.

Glen Keane: One of Disney Animation’s premiere character animators, the artist joined the studio in 1974 and has since brought to life Penny in The Rescuers, Elliott in Pete’s Dragon, Ratigan in The Great Mouse Detective, Beast in Beauty and the Beast and the titular characters of The Little Mermaid, Aladdin, Pocahontas and Tarzan. In 2010, he served as exec producer and animation supervisor for Tangled, a story he developed for over 10 years.

Ed Wynn: The talented actor began his career on Broadway in the early 1900s, and appeared in many Disney classics of the 1960s including Mary Poppins, Babes in Toyland, That Darn Cat, The Absent-Minded Professor and Son of Flubber. Disney animation fans know him best as the manic voice of Alice in Wonderland‘s Mad Hatter.