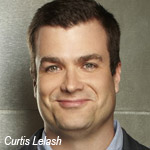 Curtis Lelash has been promoted to vice president of comedy animation for Cartoon Network.

Lelash will oversee the development of Cartoon Network’s animated comedy series, which have helped drive the network to its current standing as the No. 1 network among boys 6-11 and 9-14.

Creatively responsible for projects from pilot development through series production, he also will continue to oversee the studio’s shorts development program as a means to discover new series and to cultivate new talent. Lelash is based in Burbank, and reports directly to chief content officer Rob Sorcher.

“Curtis has played a key and growing role inside our comedy animation group,” said Sorcher. “His promotion comes on the heels of record ratings success and popular culture relevance for our comedies, and we look forward to a new wave of animation under his leadership.”

Lelash currently is an executive producer of Cartoon Network’s #1-ranking and Prime Time Emmy Award-nominated animated comedies Adventure Time and Regular Show, both of which are produced at Cartoon Network Studios in Burbank. He also supervises additional hit original comedies produced at outside studios for Cartoon Network, including Warner Bros. Animation’s MAD and The Looney Tunes Show.

Previously, as director of comedy animation, Lelash served as executive in charge of production of series such as The Marvelous Misadventures of Flapjack and Class of 3000. Lelash joined Cartoon Network’s original series department as manager, comedy animation in 2005. Three years later, he relocated from Atlanta to Cartoon Network Studios in Burbank as director of new and current series. Prior to this, Lelash worked in development at DreamWorks Animation on theatrical projects including How to Train Your Dragon and Kung Fu Panda.

Lelash graduated from the New York University with a bachelor of arts in English.