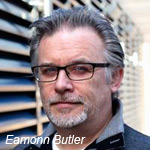 Leading digital visual effects house Cinesite has announced it has appointed Eamonn Butler as animation director to head up its expanding animation division. Butler joins the studio from Double Negative, where he was head of animation and supervised high-profile vfx blockbusters including Iron Man 2, John Carter, Hellboy 2, Paul and Harry Potter and the Order of the Phoenix.

Butler will be based at Cinesite’s head office in London and will be responsible for leading its high-end character animation team—he also joins the company’s board.

“I’d like to welcome Eamonn to Cinesite,” studio managing director Antony Hunt said of the appointment. “His wealth of experience means he’s well placed to lead our team of talented animators as we branch out into more character-driven animation films.”

Before joining Double Negative, Butler spent 10 years at Walt Disney Feature Animation in Burbank, Calif., working on Chicken Little, Dinosaur and Fantasia 2000 amongst other films. He trained under veteran Disney animator David Brain at Dublin’s Dun Laoire College of Art and Design, and spent four years working as a traditional animator, storyboard artist and animation director before making the jump to CG.