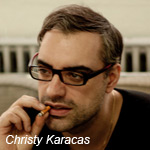 When you have one of the most off-the-wall, chaotic toon comedies on TV, how do you keep topping yourself after two manic seasons? We caught up with Christy Karacas and Stephen Warbrick, the co-creators of Adult Swim’s Superjail!—which will launch its third season on the late-night Cartoon Network block this Sunday, September 30 at 12:15—to find out how they keeps the outrageous creative juices flowing. 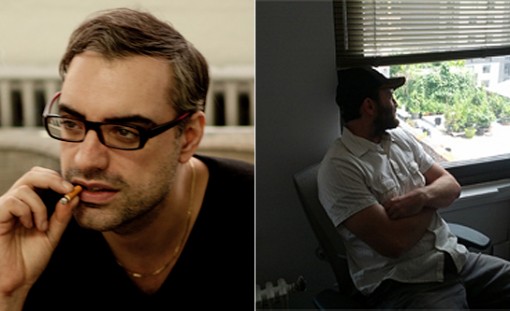 Animag: What can fans expect from the new season (besides the totally unexpected!)?

Stephen Warbrick: I think they can expect season 3 to be the best season so far…I’m not just saying that to be promotional. It really is a nice mix of the previous 2 seasons—it captures some of the more spontaneous, stream of consciousness of season 1 while furthering some of the characters and story lines that we opened up in season 2. Plus there is a weird puppet. 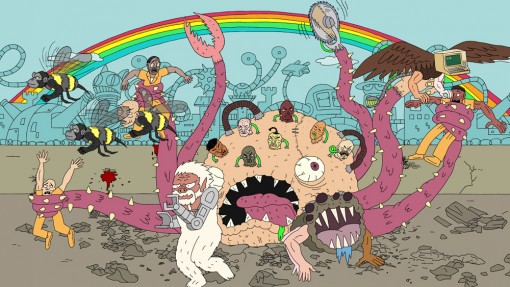 Animag: What kind of audience response have you had from the first two seasons, and how has that affected the show?

Warbrick: Every time I ask someone if they know the show the answer is pretty much “No” or “I don’t have cable” or “I don’t watch cartoons.” I usually get [feedback] through a friend who says, “I was sitting next to a kid on the plane the other day and his favorite show was Superjail,” or, “Some guy saw my SJ T-shirt and flipped out on the train the other day.” During production we are in such a box that we kinda forget that the show exists outside the studio walls.

Christy Karacas: I feel like people either love Superjail or hate Superjail. I don’t know many people who are like, “It’s okay.” That’s probably a good thing. The audience feedback/response doesn’t really affect the show though—things like money, time and network notes are what really affects the show. 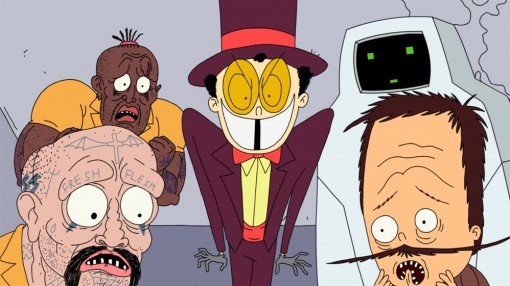 Animag: Speaking of which, do you get many notes from the network execs on what you can or cannot do on the show?

Karacas: We’ve gotten very little notes from the network this season, which has been awesome. I’m more surprised about the stuff we don’t get notes on. They also seem more worried about sexual things than violence, which always amazes me.

Warbrick: The network has been very lenient with what we can/can’t do. I am always equally surprised by what is a no and what slides through. I know that pubic hair and cannibalism are always a no. 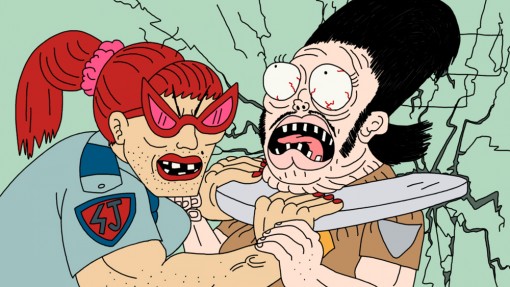 Animag: Down to the basics: Where is the animation produced, how many artists are working on it and what do they use to do it?

Karacas: Season 3 is produced at Titmouse studios—mostly in New York but some boards/clean up in L.A. We’re really proud we can produced Superjail entirely in-house. There’s hardly anything made completely in the U.S.A. anymore. There’s only a handful of studios left in New York…Makes you wonder where things are going. It’s pretty much the same [animation] system as usual: Flash. We’re starting to re-use some backgrounds finally though!

Warbrick: It takes anywhere from 35-45 people working tirelessly on it. Don’t let anyone tell you animation is quick. We started actual production (the writing was mostly done by that point) on season 3 in November of 2011, I believe … Even though it doesn’t feel like it, the schedule was expanded this season by a few months. 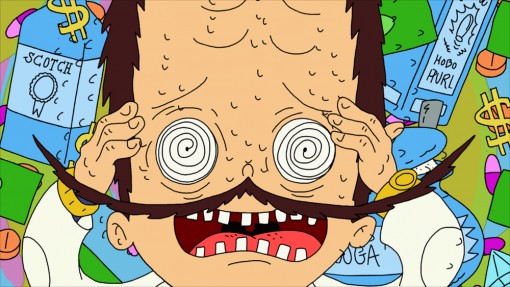 Animag: Is it tough to keep pushing the envelope with the show’s outrageous situations and crazy animated frenzies?

Karacas: It’s certainly my biggest concern. It gets harder and harder to think of fresh new ways to kill inmates. The best way is to shoot ideas around the room and just try to make each other laugh. 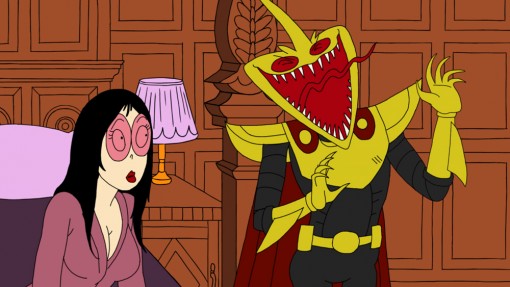 Animag: Who or what are your toon inspirations … and where on Earth do you come up with this stuff?

Warbrick: For me, most of the ideas come from television and movies that have left a mark from when I was a kid. Back in the late ‘70s/early ‘80s, parents let their kids watch anything. I am grateful for that. Since SJ never deals in pop culture references, we tend to lean toward thematic-based episode ideas. 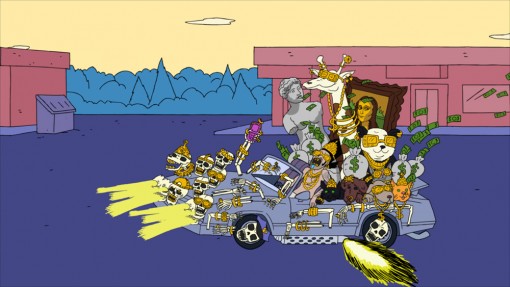 Animag: Without spoiling the fun, can you tell us if there’s a certain season 3 episode you can’t wait for the fans to see?

Warbrick: I can honestly say that they are all special in one way or another and that none of them have disappointed me yet. Last season there was definitely one or two that could have worked better…but there is a schedule, and at a certain point, you have to show it the door. 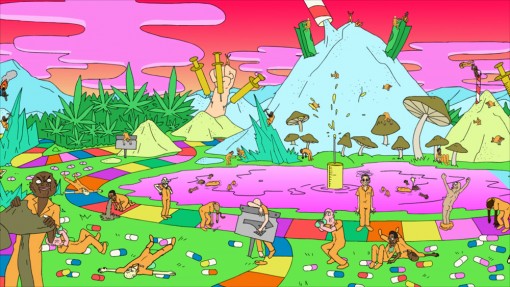 Animag: How does it feel to have such an off-beat show go into its third season? Any advice for aspiring animation creators who want to go off the beaten path?

Warbrick: Well, after this season we will have produced 31 episodes of SJ. It is amazing to watch the passion that everyone on the staff dumps into this crazy little 11-minute show that is on at 12:15 in the morning. I can say that for me, this season seems to carry itself a bit more, like the characters and the settings are themselves and they do their own thing, instead of us trying to impose our will on them. My advice to any aspiring series creator is to be a plumber…or a fireman or something else. No—But if you want to pursue it…just make sure your idea is worth it. Animation is far too painful a process to go forward with an idea that is just O.K. And when it’s bad…it’s really bad.

Karacas: It feels great. I feel really lucky that we’ve been able to do this for three seasons. The advice I’d give any aspiring creator, off-beat or not, would be not to waste time pitching to networks or execs and just make what you want to make. I highly doubt if we “pitched” Superjail it would have happened. We made a short called Barfight that got the attention of Adult Swim—then they asked us to pitch. I really think that’s the best way to go about it, because at the end of the day, even if a network isn’t interested you have something you own and you made. If it’s good, people will notice. 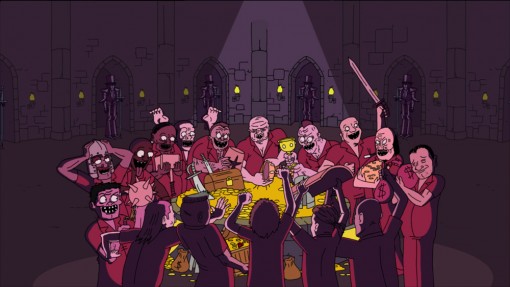 Animag: Do you have any special plans for when the production season wraps and you can re-emerge from your creative lairs into the sunlight once again?

Warbrick: The end is in sight. I know most people are burnt. I know Christy is burnt…I’m burnt. It will be nice to escape for a bit. Where is a good place to go in mid November? … I hope there is a season 4.

Karacas: If I don’t burst into flames, I’d like to go somewhere warm for a few weeks. But honestly if we got another season I’d love to jump right in to season 4! 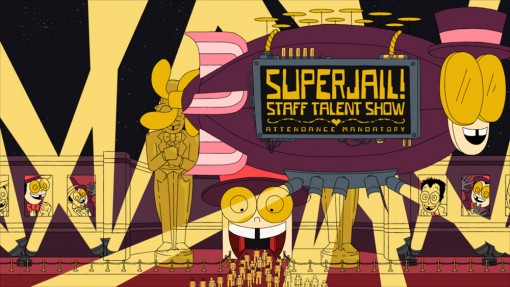 A Good Time to Watch ‘Adventures in Plymptoons!’
George Miller: The Eyes Have It