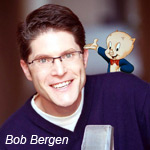 Emmy-Nominated Bob Bergen talks about his career as a multi-talented voice-over artist.

Voice over star Bob Bergen has worked on hundreds of cartoons, commercials, promos, radio programs and interactive games, but Looney Tunes fans will know him as the voice of Porky Pig, Tweety Bird, Marvin the Martian, Henry Hawk, Sylvester Jr. and Speedy Gonzalez. In 2004, he was nominated for an Emmy for his work on Cartoon Network’s Duck Dodgers and this year, he received a nomination for Outstanding Voice-Over Performance for playing Porky Pig on Warner Bros. Animation’s The Looney Tunes Show.  We recently had the chance to chat with Bob about his amazing career. Here’s what he told us:

Animag: First up, our readers would love to know how you ended up being the voice of Porky Pig which is one of the most popular animated characters of all time.

Bob Bergen: I wanted to be Porky Pig ever since I was five years old. But it was funny, because my mother told me ‘You can’t be Porky Pig. You are Jewish.” And I had no idea what she meant, because we had a Christmas tree in our house and everything. Then I moved to Los Angeles, when I was about 14. I picked up  the phone and tracked down Mel Blanc [who played Porky Pig from 1937 until 1989]. I even crashed a recording session. I also worked hard, took voice-over class and studied the craft of the business. I got my first job only a week after graduating from high school. I first auditioned for Porky Pig in 1989 and did his voice and Tweety Bird in the Tiny Toons Adventure in 1990.

What is about Porky Pig that really appealed to you?

You know I get that question a lot, and at first, it was hard work for me to answer that. But honestly, now I know it’s his sense of humor as well as his quality of innocence and the way he responds to all the crazy situations around him.

What do you like about the new Cartoon Network take on the characters and the new Looney Tunes series?

We started work on the new show a couple of years ago, and the series went through a lot of development work. To have this franchise back on the air and have it be successful is a double pleasure for me. It’s a lot of fun. We have a sharp team of writers. We get to work with classic characters that have been around for generations and it was very important to keep the integrity of the original franchise while adding more modern elements to the mix As an actor it’s been a lot of fun to be part of the show. These characters are put into situations that have never been explored before and are allowed to shine once again.

What is the secret of doing a good Porky Pig?

You know there’s actually a formula to his stutter. I used to tape the old cartoons, and then I’d adlib the funny lines. It’s both challenging and fun to do Porky because the character and personality is really unique. I also enjoy doing Luke Skywalker’s voice for many of the Star Wars games and for Robot Chicken and have been lucky to be part of many animated features. As a performer, it’s pure fun.

Do you have any advice for people who want to make it as voice-over stars?

The one thing that I always tell people is to be nice. Nobody wants to work with a jerk. You also have to learn to be creative with your vocals and be malleable with your voice. Directors will ask for your creative input. Give them a wide variety of options. They like actors that are able to take direction but you also should be able to offer your own ideas. Overall, you’ve got to be extremely creative in this business I love what I do. It sure beats working for a living!

Who are some of your heroes in the business?

I remember Frank Welker was on my first job. I was only 18 and was terrified. Every time I delivered a line, he pantomimed that it was OK. I also met June Foray when I was 14 at an ASIFA event. We became very close friends. She also plays Granny on The Looney Tunes Show.  There are so many wonderful, brilliant people working in this business—Jim Cummings, Tom Kane, Corey Burton. As a rule, voiceover people are really nice, neat, generous people.

How do you feel about the way a lot of feature animated voice work goes to big stars instead of professional voiceover actors?

You know it’s nothing new. Since the early days of animation, the first people who got jobs on features were radio stars. But there is so much product today that I think there’s enough for everyone. Of course, I would love to play the lead, but the suits wants star appeal. Pixar gets it right every time. They hire well-known people who are also perfect for the roles. I have been fortunate enough to play 12 characters in one scene and I get the same residuals. Am I satisfied? Absolutely!

You’ve been working in this business for more than three decades now. Tell us about all the changes that you’ve witnessed.

When I started out, we didn’t have Cartoon Network and Disney Channel and Nickelodeon. Back then, we didn’t have these animation studios creating all these products. Today, we have more animated shows and movies than ever before. They are also making lots of cartoons for adults too. The original Looney Tunes shorts were originally aimed for adults as well. There’s stuff in my shows that the kids aren’t going to get. They are included for adults and the college kids. These shorts became popular with the kids until the 1950s when they needed programs for TV.

Every time I channel surf, I see all the opportunities that are out there for voice work. However, as I mentioned, all the celebrities being cast for voice work is a challenge at times. Just look at the recent Smurfs movie. Everyone thought it would be a great idea to have June Foray in the movie in some form, even as a cameo. But they didn’t do it. It’s a real shame that they went with mostly celebrities, although Frank Welker did get to play Azrael the cat.

So what kind of advice do you usually give folks who want to follow in your footsteps?

I think there is work out there for all of us, if you take the time to be proactive. Become a great actor and develop your acting chops. It’s about the acting. Voice is one part of the equation. The script is just the skeleton and it’s up to you to bring it to life. Also, don’t make a demo until you’re absolutely ready. You have to wow them those first few minute. And watch cartoons. See what they’re buying. Know the business of the business and be specific about your goals.

You can learn more about Bob and his voice talents at www.bobbergen.com 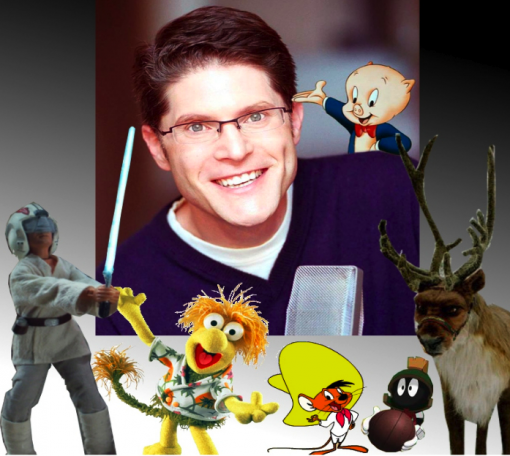