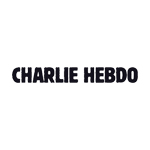 The Paris headquarters of French satirical magazine Charlie Hebdo was the target of a horrendous attack by at least two gunmen which left 12 dead. The assault was made as the editorial team was having its weekly meeting, and two of France’s most treasured contemporary cartoonists — Charlie Hebdo‘s editor-in-chief Stephane “Charb” Charbonnier and Jean “Cabu” Cabut — were among the victims.

According to local authorities, two or more gunmen attacked the offices armed with assault rifles (possibly Kalashnikovs, according to witnesses) before making their escape. France’s President Francois Hollande described the tragic event as an act of terrorism and “an exceptional act of barbarism.” In a statement issued this morning, President Barack Obama said, “I strongly condemn the horrific shooting … Our thoughts and prayers are with the victims of this terrorist attack and the people of France at this difficult time.”

Founded in 1969, Charlie Hebdo is well known for its aggressive support of the freedom of speech. Highlighting its long history of often controversial comics and caricatures, the magazine drew international attention in 2006 when it published caricatures of the Prophet Muhammed — an affront to Islamic religious views. Charlie Hebdo‘s offices came under attack in a fire-bombing in 2011 after publishing a special issue with the Prophet’s likeness on the cover. And again in 2013, it issued a challenge with the publication of a comic-book biography of Muhammed.

A recent cartoon of ISIS leader Abu Bakr al-Baghdadi also seems to be among the motivations for the horrific attack, which is reportedly the deadliest of its kind committed on French soil since Giuseppe Fieschi’s bloody attack on King Louis-Philippe in 1835.

Demonstrators are organizing in Paris to mourn the victims and show solidarity with the magazine’s right to free expression. ARP, France’s guild of authors, directors and producers, will join the demonstration, stating:

“No threat of violence, whatever its motive, whether it’s political, religious or otherwise, will hurt the freedom of expression and freedom of creation.”

English-language coverage with live updates can be found on the BBC News site.

UPDATE: Reports Wednesday that police had killed one of the suspects have not been substantiated. However, one of the persons being sought — 18-year-old Hamyd Mourad — has turned himself in to authorities in the town of Charleville-Mezieres. The two suspects remaining at large are Said Kouachi, 34, and Cherif Kouachi, 32. BBC reported Thursday that the two men on the run robbed a service station in France’s Aisne region, and according to the station’s manager they were heavily armed and drove off in a vehicle believed to be one hijacked in Paris after the attack. 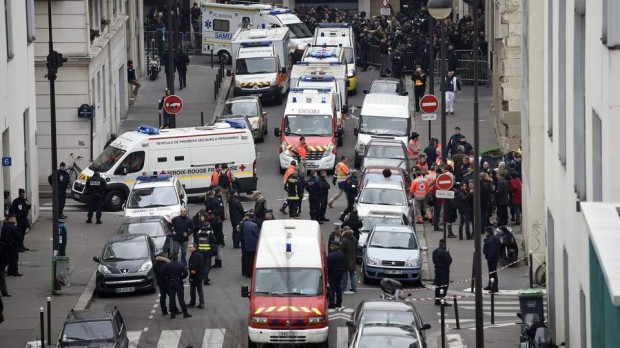