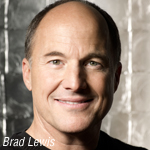 Lewis comes to Digital Domain after 10 years at Pixar racking up credits that include producing the Oscar-winning Ratatouille. Prior to Pixar, he spent 10 years at PDI/DreamWorks, where he was a producer on Antz and an executive producer on various movies and TV shows.

His feature film character and visual effects credits include The Arrival, The Peacemaker and Broken Arrow. His television credits include Hanna-Barbera’s The Last Halloween, for which he received an Emmy Award and the first 3D episode of The Simpsons, which earned him an Emmy nomination. Lewis received an Emmy for graphic design for ABC’s Monday Night Football and his commercial production work garnered him two Clio awards. Lewis also served as mayor of the city of San Carlos, Calif.

“I am excited to join a company with Digital Domain’s talent and expertise and to have an opportunity to be a part of its team in creating family-friendly stories and adventures,” says Lewis. “It’s going to be a fun ride.”

“Brad is truly one of the nicest and most talented people we’ve met in the film industry,” said DDMG Chairman and CEO John Textor. “We are honored that he has chosen to join us, having come from an environment that we believe represents the finest traditions of storytelling.”