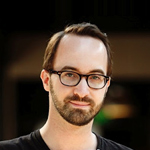 In addition to The Blue Umbrella, which screened in front of Monsters University, Unseld worked as a cinematographer on the Pixar features Toy Story 3, Cars 2 and Brave.

Unseld also will work as a commercials director on Passion’s roster.