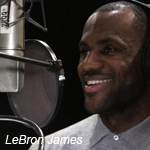 Good things happen when the worlds of professional basketball and animation collide—and no, for once we are not talking about Space Jam. We’re talking about the cool webtoon The LeBrons which just wrapped its first season after garnering over 50 million views on YouTube. Starring Miami Heat forward LeBron James, the show recently confirmed season two is in the works for its new home on MSN/Xbox—but you can see it on youtube.com/thelebrons and lebronjames.com right now.

In light of this news, Animag caught up with exec producers Dan Goodman and William H. Masterson III (founders of Believe Entertainment Group)—who also brought in Andrew Egiziano (co-founder, Dru Dog Productions) and series director Ido Gondelman to comprise the LeBrons hive-mind which provided the answers to our burning questions.

Animation Magazine: Can you tell us when and how you got involved with the project?

Believe Entertainment: We met LeBron and his business manager, Maverick Carter, through Nike executives. They told us about the vision LeBron had for this project and we instantly knew it was a big idea that would translate really well to the web and to LeBron’s audience, and we wanted to be a part of it. Our role is acting as the studio; we helped LeBron develop this into a show based on his vision. We financed and developed The LeBrons, and we were responsible for all sales, distribution and home entertainment, which we did in partnership with LeBron and his company Spring Hill Productions. We were really fortunate to have Dru Dog Productions as our lead partner who managed and oversaw the entire production and collaborated with truly talented design and animation teams at House of Cool and eMation. 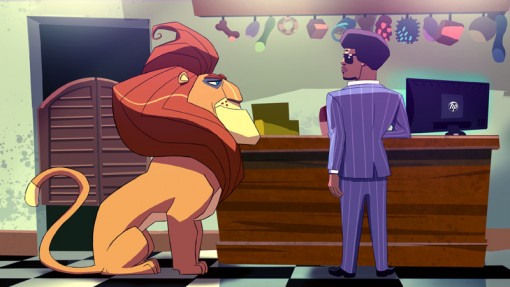 What appealed to you about the show?

BE: Obviously no one would pass on an opportunity to work with LeBron. But add to that an opportunity to develop a highly creative show and to set it up in digital channels in a totally breakthrough way—it was an amazing experience. We also wanted to provide him a platform to reach youth and young adults online in a really positive way. The show was all about inspiring youth and giving back. We wanted to continue LeBron’s great work with young people and help make an impact.

What kind of budget did you work with?

BE: Believe Entertainment Group financed The LeBrons, but as policy we don’t discuss budgets publicly. What we can say is that this is just as involved and elaborate of an animated production as any TV show. We just did ours in short-form format.

How long did it take to make one episode?

BE: The entire series was produced all at once in a single pipeline. Total production time was approximately nine months, start to finish. Dru Dog Productions ran the entire pipeline and created a really innovative approach to developing this effort, pulling from resources all over the world from LA, NY, Toronto, Korea and more. Our team went through the full process of creating storyboards, drawing characters and thousands of frames for each five- to seven-minute episode. We also did voiceovers for the four main characters—Kid, Wise, Business and Athlete—and a dozen supporting cast and characters; this included LeBron as the voice of Business, Niecy Nash as Gloria, and Drake made an appearance as himself. 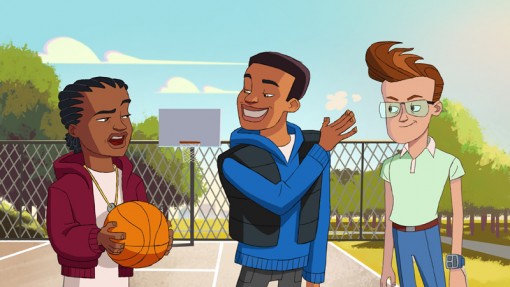 What is LeBron James’ involvement with the project? How hands-on is he?

BE: This was LeBron’s vision so it’s no surprise he is very involved at every stage—during the production he’s reviewing scripts, giving direction on character design, storyboards, and the like. But he also stars in the show. He’s done live-action openings where we talk about the positive messages of each episode, and he’s even voicing one of the characters named Business.

BE: The creative team for The LeBrons includes top talent from throughout the animation business. Our partner Dru Dog Productions utilized the support and resources of Digital eMation, in Seoul, South Korea, precision edition was provided by Andy Tauke (Seth MacFarlane’s Cavalcade of Cartoon Comedy) and post-production was done by Hacienda Post (SpongeBob Squarepants, Samurai Jack) in Los Angeles.

How did you get the word out and why do you think the show has been such a hit on the web?

BE: The LeBrons was distributed through YouTube and we heavily promoted and distributed through LeBron’s Facebook and Twitter as well as a dedicated section of LeBronJames.com; we also syndicated the series across targeted sites on the web through Digital Broadcasting Group (DBG). LeBron has nearly 15 million fans on Facebook and Twitter alone, and we believe the future of digital entertainment is about all of these things together forming a really powerful distribution vehicle. We capitalized on where LeBron’s audience already is, and we addressed the audience on their terms and how they want to watch. As a result, LeBron’s fans not only loved the show, but shared it with their friends, tweeted about it, posted comments about it and started conversations with other viewers online about the life lessons it teaches. Of course, to have a hit digital series you have to start with great talent and great content. There is no substitute for a tremendous talent and creative partner, especially one who is a business-savvy creative partner like LeBron. 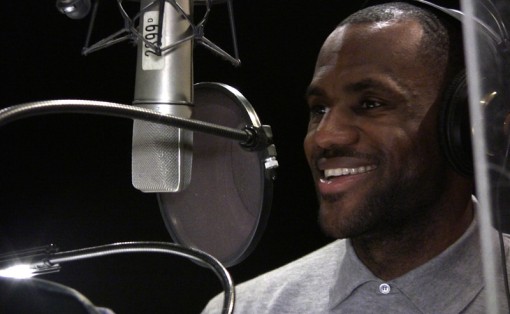 How is the animation done?

BE: The goal with The LeBrons was to create this unique and exciting visual world. Our partner Dru Dog Productions brought in director Ido Gondelman, Ricardo Curtis and his company, House of Cool, Inc., who developed the original ideas into the rich, character-driven stories of The LeBrons. Voice actor and coach Michael Bell provided vocal direction, creating a natural storytelling ambience.

What were some of your visual/animation inspirations for the show?

BE: The LeBrons was inspired by four characters that represent four different sides of LeBron James’ personality—Kid, Wise, Business and Athlete—that originally came from a series of Nike television commercials starring LeBron. LeBron decided to create the new series loosely based on these characters, told through the point of view of Kid, that would take place in Akron, Ohio, LeBron’s hometown. The neighborhood is a character itself, as it depicts LeBron’s real life childhood stomping grounds and serves as the nurturing but sometimes difficult backdrop of youth trying to find their way in the world. The creative teams of Believe Entertainment Group, Dru Dog Productions and House of Cool spent a day with LeBron in Akron visiting key locations from his years growing up. Places such as the outdoor basketball court, the high school gym, the community center pool and the neighborhoods were adapted in detail by Ricardo Curtis and Ido Gondelman; the two directors and their artistic teams captured the nuances that made the backgrounds unique to The LeBrons.

What was the toughest challenge for you?

BE: We’re working with a short-form series (five to seven minutes) so the story had to be told succinctly but with enough depth to build affinity to these characters and build at least some basic story arcs. Plus we had to do it all while maintaining the highest production standards and trying to push further on the stylistic approach of the show itself. We’re excited to be working on a second season of this truly special show. 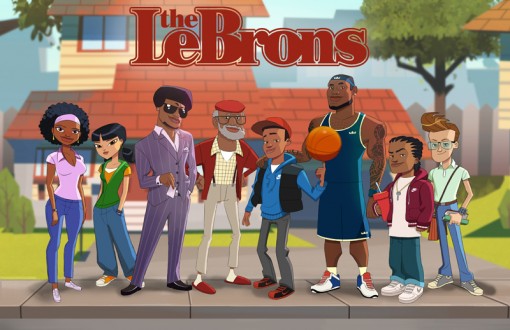 Do you have any plans to take the show to other platforms?

BE: Our business and all of our projects have a digital focus because we see how digital is taking over mainstream. Consumers are watching entertainment through digitally-enabled channels, and success to us is having a hit series on the web, where the fans are. We are open to possible TV distribution for The LeBrons in the future and looking at multiple new venues to continue to distribute the show.

What are the plans for Season Two?

BE: We are currently in development for a second season of The LeBrons, and Microsoft’s MSN and Xbox properties will be the primary digital distribution partners. Season two will be co-executive produced by LeBron James, Maverick Carter, Dan Goodman and Bill Masterson. Andrew Egiziano and Dru Dog Productions will continue to lead the entire production and season two is slated to launch in the second half of 2012. We made the announcement in April at Microsoft’s Digital Content NewFront in New York City.

How did this show compare to the other projects you’ve worked on in the past?

BE: I would say that in addition to The LeBrons’ high entertainment quality, it’s unique in its purpose of promoting positive values to youth—things like family, teamwork, friendship, giving back to the community, and staying in school. The LeBrons is also Believe Entertainment Group’s first animated series, although before we started Believe Entertainment Group, we worked on another fantastic animated show, Seth MacFarlane’s Cavalcade of Cartoon Comedy.

Believe Entertainment Group’s other projects include a recently launched behind-the-scenes, documentary-style show with legendary DJ/Producer Tiësto, called In the Booth (youtube.com/tiesto), and later this year we will launch a new lifestyle and entertainment news series with Jennifer Lopez and Nuyorican Productions, called Tiger Beat Entertainment. What we strive to do with every project is to find a way to engage our talent partner’s active fan base; it’s one of the things we look for in any partner or project that we greenlight. With LeBron, Tiësto, Jennifer and any of our talent partners, we can connect with two very active social media fan bases on Twitter and Facebook in order to help deliver great content to fans and viewers.