Mari Jaye Blanchard’s film Craft won the Audience Award at the 2011 Animation Block Party film festival. If you live in Brooklyn, you can see Mari Jaye’s large-scale murals at Trader Joe’s. Her personal website is www.marijayeblanchard.com

Casey Safron: Your film Craft features a young woman who seems to never leave her city apartment. Did you use your own living space as reference in animating this?

Mari Jaye Blanchard: The apartment in Craft is 100 percent  made up, but I feel like I know it as well as my own apartment now since I had to draw all the camera moves. I do not use 3D models at all, so I definitely got a bit turned around at times. I relied on a little thumbnail floor plan I’d sketched out that showed me where all the furniture was. 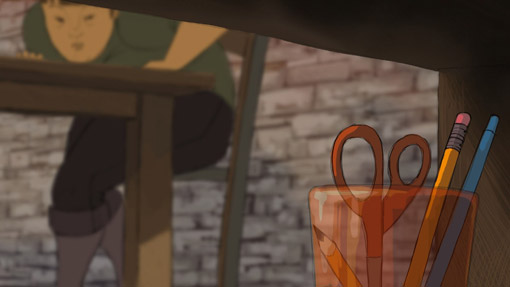 Safron: You’ve done a handful of animated shorts for Sesame Street. How did you initially get linked up with them?

Blanchard: I am still pinching myself about the Sesame Street work! It is crazy to me how it actually came about. The real beginning was a commercial break during Family Guy a few years ago. It was for a Fox contest to find new pilot ideas. The contest was being run through Aniboom.com, and I created a short called Beckner. It didn’t win, but the next contest they posted was for Sesame Workshop. I felt like I’d be kicking myself forever if I didn’t try, so with the help of a musically talented co-worker, I ended up making two shorts: Lonely Eleven and Inspector Nose, Private Eye. We ended up winning in the School Readiness category, which earned us a cash prize but no air date.  We were absolutely psyched regardless, so when a Sesame producer called me a couple weeks later asking if they could air it, I couldn’t believe it. The rest, I guess, is history. The contest put me on the Sesame producers’ radar, and I’ve made three more shorts for them since then. I am learning invaluable lessons about the industry and about animation in general, and am so grateful for having been given the opportunity. 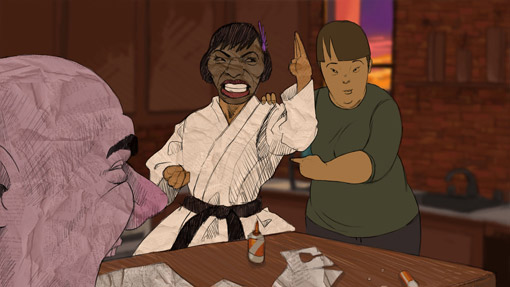 Safron: As a muralist, have you ever considered creating a mural based film using pixelation or stop-frame animation?

Blanchard: Truth is, I don’t have a great explanation for why I haven’t been able to incorporate painting into my animated work. An easy answer might be that the mural painting I do these days is commercial work, so it isn’t the most inspired mode of working for me. But I am hopeful that one day I’ll find a project that might merge the two mediums.

Safron: Thanks for taking the time talk animation, Mari Jaye – and congratulations again on the ABP 2011 Audience Award.