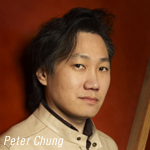 This Wednesday (Nov. 24), Cartoon Network will debut its first CG-animated movie,  Firebreather, which is directed by Peter Chung (Rugrats, The Animatrix: Matriculated,  Aeon Flux). Based on the comic-book series by Phil Hester and Andy Kuhn, the visually arresting pic centers on the high school life and challenge of a half-human teenage boy named Duncan (voiced by Jesse Head), whose father is a 120-foot fire-breaking Japanese Kaiju monster. We recently caught up with Chung to get the details of his cool new project:

So tell us how you got involved with this teen monster project?

Peter Chung: I first heard about the project over two years ago. I learned that it was being developed at Cartoon Network, and they wanted to see what kind of visual approach I would take to adapt it to my style. So I did some visual development and designed the main characters and the environment and they liked what I done. They asked me to produce a one-minute test animation, which I did in 2D. A month later, they came back and told me that they liked my take on the property, but were very interested in produce their first CG-animated series, so that’s where we went. We are presenting it as a 68-minute movie, but there are talks about it becoming a series in the future as well.

What did you find appealing about the story and the characters?

It was about a character who is half human, half monster. The idea of a boy caught between two parallel worlds sounded very interesting to me. As a child, I always enjoyed those Japanese Kaiju monster movies such as Godzilla and Mothra. I knew that I could have a lot of fun both storywise and visually with the project and I could work on a larger scale than the other things I had worked on before. It also provided me with the chance to work on a feature-length CG-animated movie.

Can you talk about the difference between working on 2D projects like Aeon Flux and a full-scale CG movie like Firebreather?

In preproduction, I approached it the same way. However, along the way, I realized that there were a lot of things I didn’t need to do, like dealing with exposure sheets and figuring out the timing of animation beforehand. It’s ironic, but CG allows the process to be more organic and you can be more creatively engaged throughout the process. In 2D animation for TV, a lot of the creative decisions had to be made in the front end, while in CG are able to keep revising the animation deep in the process. I found it deeply satisfying as a director. 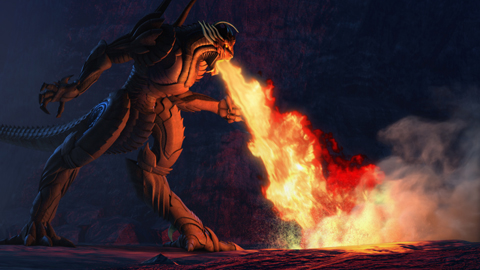 Was it a challenge to put your personal stylistic stamp on a CG-animated project?

It really wasn’t difficult to adapt to the CG world. They wanted me to put my own stamp on the project, so it wasn’t difficult at all. We have seen a lot of the same narrow range in CG properties over the years, even in the big studio features. There seems to be a formula for how CG should look. I didn’t want to do that especially because this wasn’t a comedy, and I didn’t want to have the characters be goofy-looking or highly exaggerated.

Because the main character is half-human, half-monster, his appearance is very important to the story: He needs to pass as a human. We kept pretty close to human proportions. You can get subtle nuances in how characters look and how people’s faces are designed in CG. Later on, in the animation process, I found that you could get more nuances in their gestures. The pre-production was done in L.A., but the animation was done by SamG studio in Korea. They have a very well-run 3ds Max production pipeline and I had worked with them before. For Firebreather, I went overseas and worked in Korea for six months. We started working on the project in March of 2009, and over all it took about 18 months. Animation took from December of 2009 to August of 2010.

What was the biggest challenge for you in directing this particular project?

It was the same challenge as directing anything, really. It was finding a way to tell the story of this teenage boy’s dilemma in the most engaging and compelling way. It was about creating characters that the audience cares about. The movie deals with a lot of a familiar elements—superheroes, high school, giant monsters, so it would have been easy to fall into a kind of formulaic, pastiche routine. That’s not how I wanted to treat the story—we didn’t want to have a parody, no irony…I wanted to make a real old-fashioned movie with an engaging story that wasn’t winking at the audience. The action sequences do pay off, because we’ve laid out a lot of emotional groundwork beforehand. These two parts of the movie really enhance each other. I’m a huge fan of those old movies, but for the most part, you end up just waiting for the monster to show up and the rest of movie isn’t very compelling.

You’ve been working in the animation business since the late 1980s. Can you talk about what a different world it is today than a couple of decades ago?

It has certainly opened up a lot of more opportunities. A movie like Firebreather, with this level of production value couldn’t have been made even five years ago. The technology is so much more accessible today. The new platforms, the cable outlets, the DVD field have opened up a wider range of format as well and broadened the audience. You can targe more specific niche audiences. That means you also have a larger variety of stories, animation and writing styles to work with. Firebreather really came to me out of the blue. It was a really unusual opportunity—projects like this don’t come along that often.

Firebreather premieres on Cartoon Network on Nov. 24 at 7 p.m. The movie will encore on January 1 at 7:30 p.m.

Illumination’s ‘Hop’ Gets a Teaser Poster
Hair Apparent: The Scoop on Tangled