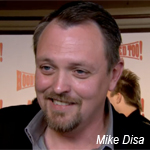 A native of Chicago, Mike Disa brings an extensive resume to the task of co-writing and directing Hoodwinked Too!: Hood vs. Evil.

Starting out in video games and TV, Disa worked his up to posts at such major animation studios as Disney, Warner Bros., Marvel, Amblin and Hanna Barbara before going independent. He co-created the series pilot Deadwood for Warners Online, directed commercials, and developed feature project for Warners feature animation.

Disa directed and storyboarded the Lilo and Stitch short for Disney called The Origin of Stitch and spent a year working on Rob Zombie’s El SuperBeasto before landing Hoodwinked Too!, the sequel to the 2006 original Hoodwinked.

Though due for release this week, production on the film was completed in 2009. Since then, Disa has directed the feature-length animated adaptations of EA’s video games Dante’s Inferno and Dead Space Aftermath. He recently returned to finish the stereoscopic 3D work on Hoodwinked Too!

Animag: How did you get involved in Hoodwinked Too!?

Mike Disa: I got a call from [Weinstein Co. production exec] Eric Robinson. Eric and I had known each other briefly on other projects. He sent me the script. My first exposure to Hoodwinked wasn’t the film, it was the script, the idea of the second film, which I thought was a very smart idea. It was kind of designed as an edge-of-the-seat action film for families. … It was clear in the script that the writers were expecting the audience to have seen a lot of action sequels and reading the script I thought, we can take this further. We can make every scene an homage. So, after I fell in love with the script I went back and watched the first film.

Animag: What sets the sequel apart from the original?

Disa: One of the important things we did is we really amped up the scale of the movie. … This movie goes all over the place: It starts in the forest, goes to a secret agency, to cities, to mile-high bean stalks and a secret, dark castle hotel. We have a huge action sequence that goes back and forth across this fairy tale city.

What we did was, taking the idea of a modern fairy tale in modern times, ask what would a fairy tale city look like having evolved for hundreds of years? What would their buildings look like, how would they get around, do they have airplanes … . We sat down and worked out the technology and mythology of the world of Hoodwinked that they hadn’t really established in the first film. From there it was making sure it looked as good as possible — rendering, lighting, all the tricks you learn in 20 years of animation. [Production designer] Ryan Carlson is drop dead brilliant; he was able to expand the nugget that was the first movie into this vast and intricate and unique world. Not the same old 14th century French village. … We used to joke around: Fairy tales! They’re not just for the 14th century any more!

Animag: How did you tackle such a large-scale film on an indie budget?

Disa: I pulled together two of the best guys I know, Jeff Siergey [head of story] and Ryan Carlson. I sat them down and we looked at the script — we don’t have a lot of money, but we all know from working in big studios that most of that money never ends up on the screen. We made it work by planning everything out in advance, so we know exactly what sets and materials we need. Then sitting down and designing these so they are better looking than anything in big-budget films. We weren’t going to waste money changing our minds over and over, we were going to do it right the first time … the three of us worked out 99.9 percent of all the designs and characters and all the things we needed to make it work before we even considered going into storyboards.

Approaching it as a medium-budget live-action film, up front we realized we had more than enough money to do an amazing job on the stuff we had. … We never let money ever, ever limit what we were doing. … We just let the discipline of good filmmaking keep us on track.

Animag: What software did you use for the CG? How big was the team? How long was production?

Disa: [The film] was done exclusively in Maya. I had it written in the contract we were going to use off the shelf Maya for this. The thing that drives me crazy is when studios build all this proprietary software into their pipeline and they say it makes it work better, but it doesn’t. … I wanted to pick up the film at any moment and take it to the best people to work on it.

We never had more than six artists here in Los Angeles. Here we did all the storyboards; Siergey did half the movie himself and did it in six months! We did the animatics here. We designed all the characters, props and materials; we built all the characters (except some one-offs) and models here. Ryan painted all the texture models for everything — characters, sets, props — with two other people. All in six months. … When we got approval to go ahead, at that point we’d hired two studios — Starz in Toronto, Bardel in Vancouver — and the idea was to ship out timed animatics to Starz and they do all the camera work and rig characters, then split the animation between studios and get it done very quickly.

From script to the day we wrapped was about 29 months. …  After we were just about ready to deliver the first cut, there was a pause. … Relationship/money stuff between Kanbar and the Weinsteins, and about whether to do stereoscopic 3D. I had six months to run off and do two R-rated anime films, then the call was, “Enough screwing around, get your ass back here!”

Animag: What is your take on the animation industry today?

Disa: Animation is basically Big Macs. You don’t sit in your kitchen and make a Big Mac, you first have to build McDonald’s. You have to own farms and set up deals to buy bread and with people who build ovens. … To make a Big Mac you have to spend several billion dollars. The big studios are essentially using the same model to make more or less the same product. … What live action has is your little mom and pop burger joints. You don’t have to spend a lot of money, the menu’s a little more varied. … Animation hasn’t been able to support the mom and pop places. But that’s changing. … If you have a smart budget and you work carefully and you have a smart team, you can do something experimental and extreme. We’re getting there.

Hoodwinked Too! Hood vs. Evil is set to be released in 3D on April 29. For more info, visit hoodwinkedtoomovie.com and mikedisa.com.