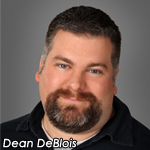 Director Dean DeBlois on How to Train Your Dragon’s Golden Globe nomination, the animation world and award season madness

Animation Magazine: Congrats on your movie’s Golden Globe nomination. How did you find out the good news?

Dean DeBlois: I had set my alarm to five a.m., which was the time the news was announced. I just got up early and searched for it online, until I found the nomination results!

Animag: What do you make of the whole award season madness?

DeBlois: Award season is always fun, and I’ve been able to be part of it both as an outsider and as a participant as Lilo and Stitch received some recognition in the past. They give you the chance to meet some of the people whose work you admire. I subscribe to the statement that you should consider both success and failure as the illustrations that they are.  Don’t let the whole thing get to you, and just believe in what you do and forge forward.

Animag: What is your take on the rest of the Golden Globe Animation category?

DeBlois: I am very happy with the movies that were selected. The five movies that were selected offer a broad example of the great work that was done in animation this year—ranging from Sylvain Chomet’s The Illusionist which is a poetic work aimed at a very specific audience—a slow-paced hand-drawn, beautiful film to a movie like Despicable Me, which offered broad humor to features such as Toy Story 3 and Tangled, which have lots of heart and excitement for audiences.

Animag: Some have expressed concern that no animated feature is in the Globes’ Best Comedy and Musical category. How do you feel about this ghettoization of animation during award season?

DeBlois: You know the year that Lilo and Stitch was released (2002), they didn’t even have an animation category, so it’s nice that they have a separate category acknowledging animation. But the overall trend is indicative of the lon-standing stigma that animation has in our country, something that you don’t see in France or Japan, where animation is part of the mainstream and it’s not considered kiddie fare. No matter how much sophistication we have in films—just look at the bold choices displayed in Pixar and DreamWorks this year—they get marketed as films for the kids. It used to be that adults would have to feel embarrassed to see these movies on their own, but that’s changing. We’ve seen these movies come out and make a lot of money and receive strong critical praise, so you can’t assign animation to the kiddie table anymore. You have to acknowledge that these films are responsible for generating great business at the box-office.

Animag: Why do you think your movie has struck such a chord with audiences worldwide?

DeBlois: I think it’s the truth that exists in it. We took upon a story that had consequences, believable stakes and real peril. There were moments in the film that sat with people because they felt it was a little daring for animation. When we presented the studio with the fact that Hiccup was losing his leg, there was a bit of silence in the room…They were asking, can they really do that? It’s to Jeffery Katzenberg’s credit that he was pushing us to do something that would create stronger response in the audience. The studio allowed us to stay true to the story, without being afraid of what the letters from parents might say. We were able to tell a classic story that doesn’t wimp out of its darker moments. Right now we’re working on the second installment of the Dragon story. I just turned in the script last Friday and it’s clear to see the larger story and look at the first movie as the first act. The fact that it has the success of the first movie behind it, allows us to continue with the same tone—which is rich, intense and engaging.

Throughout my career, I’ve worked at Don Bluth Studio, Disney and Dreamworks, and it’s kind of a tradition in animation that they crew up the film before it’s completely ready. The crew ends up working on sequences that aren’t going to be in the final version. Right now, I’m pushing for the opportunity to make the story as good as I can, get all the notes hammered out before the team comes on board. It seems so much smarter to me to have everyone put their time, resources and passion into it this way.  The second movie is slated to come out in November of 2013, so we have three solid years to work on it, so that people won’t have to check themselves in a mental asylum when we’re done. We only had a little over a year to finish the first movie!

Animag: What is your take on the state of animation in 2010 and beyond?

DeBlois: It’s really exciting to see the diversity of work being produced at both smaller studios and bigger ones and how great the new 3-D technologies are being applied to movies. The technology can be used to create better hair, fur, face and muscle structure and to bring more realism to caricatures. The finished products are so engaging that they blur the line between live action and animation. You can now tell stories that have the same richness of tone and sophistication of live-action movies, but you can bring a level of whimsy that you can’t pull off in live action. The bar keeps getting raised. As we have already seen in movies such as Up and WALL.E as well as this year’s offerings, animated movies have embraced emotional themes and audiences have responded to stories that have truth to them. The good business they have generated at the box office has empowered that creativity.

Dean DeBlois is the co-writer and co-director of Lilo & Stitch and How to Train Your Dragon (with Chris Sanders). He also directed the Sigur Ros documentary Heima. He worked with Don Bluth on Thumbelina and A Troll in Central Park and co-wrote Disney’s Mulan.

You may also like...
Related Topics:Animated People, Dean DeBlois, Golden Globes, How to Train Your Dragon