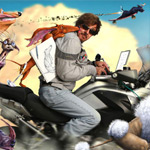 Animag: How did you come up with the idea for the book, Mars Needs Moms, which in turn inspired the movie?

Berkeley Breathed: When the idea occurred to me, it was a cinematic narrative that first sprang into my head. All of my books were always films first in my imagination … and I worked backward to trim the conceit into picture book size. I suspect Jack Rapke of ImageMovers thought the same thing: He virtually optioned the book minutes after he heard the title and the two-sentence pitch.

Five years ago, my son Milo pushed away a plate of broccoli after my wife did some high decibel arguing … and declared that he didn’t see why he or anyone would ever need a mother. This left the latter in tears. I dragged my son to his room and asked how he would feel if his mom were to suddenly disappear. “How?” asks my son. I answered logically: “A momless Martian commando team.” The story was written later that night. The movie’s Milo … is my Milo. He’s asked for gross first dollar points, by the way.

Why do you think the story lent itself well to a motion-capture feature rather than a 2D toon or a live-action sci-fi feature?

The funny thing, really, is that in the broad strokes, it is a live-action sci-fi feature. Tonally and graphically, it’s more that than it is an animated film. Granted, the book was drawn as concept paintings for a conventionally CG animated movie. But Bob Zemeckis made motion-capture movies. These are a different animal with a different aesthetic and a different tone: less comedy, more action … and a heightened level of verisimilitude. It’s an old-fashioned kid’s matinee picture that I’d wished would have been a part of my own childhood.

On the other rhetorical hand, it is an animated film, of course. There were very skilled animators moving s*** around. Just don’t tell Zemeckis that.

This isn’t your first venture into the world of animation. Back in 1991, Amblin and Universal did a TV holiday special based on your book, A Wish for Wings That Work. How was this different from your previous experience?

Ah! Wish for Wings was a bit of a missed opportunity. It could have been much more. Hey, come to think of it, it’s the 20th anniversary of Wish for Wings, so let me tell you a secret: the director, who was fired, managed to sprinkle a profane cornucopia of inappropriate flotsam around in the show, broadcast on CBS during the 1991 and 1992 Christmas season. Find a moldy DVD and check out the opening credit sequence: Watch the snowy hills during the pan. Some of them aren’t hills. And that train track isn’t really going into a train tunnel. Unless it’s Sigmund Freud’s. It’s pretty funny now. Imagine how funny it was when we finally spotted it during final mixing, six days before network broadcast. Keep in mind, this was a Steven Spielberg production of a family Christmas show. I tried but failed to imagine Steven believing me when I tried to disclaim authorship of a woman’s snow anus in the countryside. Or the sign in the window of the store that said “For sale cheap: Santa’s Balls.”

Too late to change! This was the pre-digital age. We courageously let it go without telling anyone. I’m glad I’m telling this in a trade magazine and I can feel safe that it won’t be going out on the Internet thing.

Thanks a lot for that tip. Our readers are going to get a kick out of that. Returning to Mars Needs Moms! What is your favorite scene in the movie and why?

There’s a scene in the film which is the scene in the book from which the story was written backward. It’s also the scene which got me fired by my publisher of 25 years, as they found it too shocking for a children’s book. It lives in the third act—directed with pitch perfect delicacy by Simon Wells and performed by Seth Green and Joan Cusack. I cried, which, as my own Milo pointed out during the screening, is pathetically pathetic. But it was my baby, and it lived.

What was the toughest aspect of bringing the movie to mo-cap life?

That would be a question for the production team, but the challenge for me as the author who’d painted the book as a conventionally animated feature … was making peace with the look of motion capture. The story was always one that could have been done as either a comedy-heavy romp … or an action-heavy adventure. Simon Wells and Bob Zemeckis pretty much split the difference.

What were some of your favorite animated shows/movies when you were growing up?

Astonishingly, I looked forward to Mr. Magoo’s Christmas Carol every year. Mighty Mouse was a cherished Saturday afternoon reward. And the penguins from Mary Poppins probably—I say probably because inspiration is a tough thing to source—probably was the source of Opus. To this day, it’s a 2D animated film moment I can still enjoy. Mary Poppins itself is largely the reason why I concoct stories for the movies today: family films will never find that sweet spot again … but reaching for it continues to be the fire below my imagination.

What do you think about the world of animation in 2011? Do you have any pet peeves?

Peeves? I have peeves about live action. I don’t want to blurt out names, but who the hell thought so much (TRANSFORMERS) live-action crap can pass (TRON) as a suitable story for (THE LAST AIRBENDER) a self-respecting movie? Complex, challenging cinematic narrative and story live bravely and virtually alone in the world of movie animation. Toy Story 3, How to Train Your Dragon, Up, Ratatouille. There’s few live-action movies released today with one-quarter of the story in either of those. Look, I’d love to write ideas for live-action movies and avoid living in the Old Cartoonist’s Rest Home by the time they make it on the screen. But animation still demands Story with a capital S. DreamWorks and Pixar understand this. Bless them. It’s the golden age of story and it lives in animation.

What is your favorite B-movie of all time?

Them! Try it. Watch how the stupidest—is that a word?— stupidestly stupid fake giant ants still scares the poop out of you and your kids. Especially kids weaned on today’s over caffeinated CG action. You’ll never look at the Mojave desert the same again. And you certainly won’t hike with sugar in your pack.

The secret to that movie, by the way, is one forgotten by most CG animators today: slow … is scary. Directors: stop throwing your robots and alien giants all over the walls like skittering bugs. Dynamic is not the same thing as terrifying.

Tell us about the other animated projects you have in development/production? Any chance we’re going to see a Bloom County or Opus series, TV special or movie?

Opus lives in a great treatment … but the rights are mangled. We may unmangle at some point. Presently I’m executive producing a movie at DreamWorks based on my own novel Flawed Dogs. Beyond that … I ain’t tellin’! 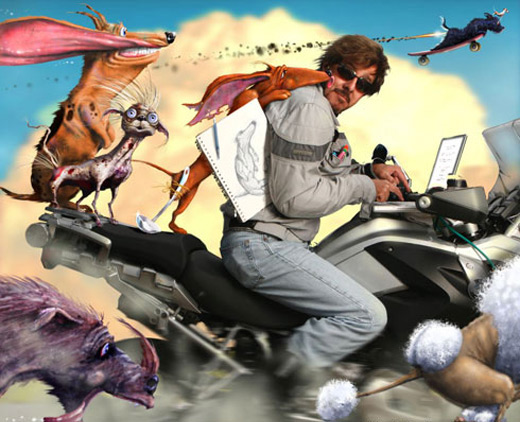 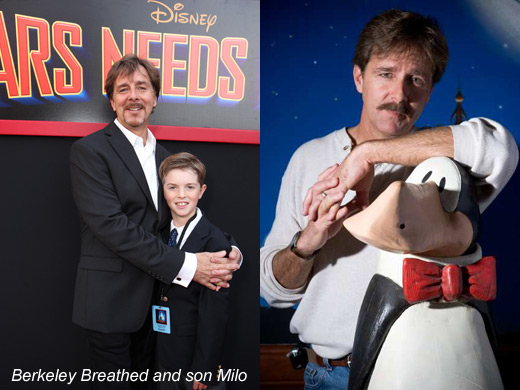 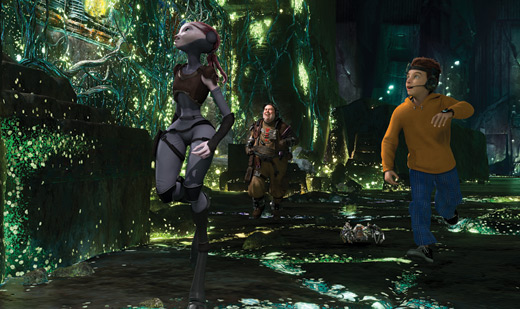