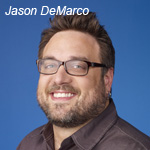 Jason DeMarco, previously vice president of marketing and promotions for Cartoon Network and Adult Swim, has been promoted to Vice President and Creative Director, On-Air for the mature content comedy block Adult Swim. DeMarco will be responsible for leading the creative direction, development and implementation of all facets of on-air communication, promotion, packaging and sponsorships. He will also oversee the internal structure of the on-air and the sales promotion creative and production departments, working closely with the Adult Swim marketing team. Based in Atlanta, DeMarco will report directly to EVP and Creative Director Mike Lazzo.

In his previous role, DeMarco was responsible for cultivating brand building partnerships and developing promotional marketing programs to extend each network’s reach, visibility and brand messaging off-channel. He also oversaw the development and execution of customized, revenue-driving integrated promotions and sponsorships for the networks, and supervised all AYAKM special events and trade marketing activity, including the Upfront programs.

A Savannah College of Art and Design graduate, DeMarco began his Cartoon Network tenure as a senior writer/producer for Toonami, creating on-air promos for the programming block, before becoming associate creative director for Toonami/Miguzi, in which role he was critical to the development of signature on-air packaging for Dragonball Z and Pokemon. DeMarco went on to become creative director, sales promotions for Cartoon Network and Adult Swim where he developed national advertiser promotional programs and sponsorships across multiple platforms. During this time, he founded Williams Street Records in 2008, serving as primary artist and repertoire contact, creating original albums to support on-air series.