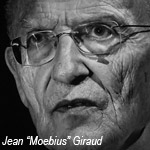 Jean Giraud, whose comic book work and film designs under his own name and his science fiction nom de plume Moebius made him one of the most acclaimed and influential artists in the world, died Saturday after a long struggle with cancer at his home in Paris at the age of 73.

Giraud’s contributions to comics include the stunning realist Western strip, Blueberry, created with writer Jean-Michel Charlier; and numerous seminal science-fiction and fantasy comics as Moebius, including The Airtight Garage and Arzach. He also frequently collaborated with writer Alejandro Jodorowsky on such classics as The Incal. He also drew a Silver Surfer story written by Stan Lee for an Eisner Award-winning 1988 limited series from Marvel Comics, which also published for a time Moebius’ work in English.

Moebius also was one of the founders of the French comics art group, Les Humanoides Associes, which published the ground-breaking magazine Metal Hurlant, translated to English as Heavy Metal. The magazine’s content became the basis for a 1981 R-rated animated feature film directed by Ivan Reitman. 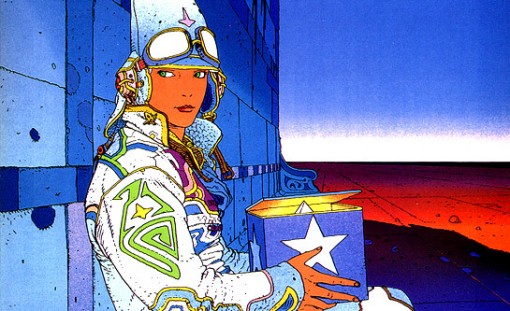 His film work included thousands of designs and illustrations that helped define the look of Ridley Scott’s 1979 film Alien, the 1982 version of Tron, an unproduced adaptation of Frank Herbert’s Dune that Jodorowsky was to direct in the 1970s; and Luc Besson’s The Fifth Element.

In animation, he helped write the 1982 animated feature film Time Masters, adapted from a novel by Stefan Wul, and wrote the story and did conceptual designs for the 1982 anime feature Little Nemo: Adventures in Slumberland. He also designed characters and developed visuals for Warner Bros.’ hybrid animated 1996 feature film Space Jam.

Born in the Paris suburbs in 1938, Giraud broke into comics in the late 1950s, first finding his niche in the Western genre. He briefly used the Moebius pseudonym in the early 1960s, returning to it with the launch of Metal Hurlant in 1975. In recent years, he has published a series of hardcover volumes called Inside Moebius, and his work was featured in an exhibit with the art of Hayao Miyazaki at La Monnaie in Paris.