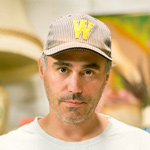 Filmmaker, graphic artist and animator Frank Ternier first made a splash with his animated short 8 Bullets in 2014. His new short, Riot, about the murder of a young black man, made its North American premiere at the Ottawa International Animation Festival last month. We thought it was a good time to catch up with the talented Frenchman.

First of all, congratulations on the success of Riot. Can you tell us a little bit about how you were inspired to make it?

I’d been wanting to make this film for a few years. Twenty-five years have passed since the Rodney King affair, and yet the number of similar incidents, or tragedies, is again on the rise in the United States and France. In light of these tragedies and feelings of injustice, I wanted to tackle the question of how to speak about violence. A film thus becomes a social manifesto…So the question I wanted to ask was: How should we react to this injustice?

What do you love about working in your specific animation medium?

I love using several techniques—photography, traditional animation, live action—to create a lot of different sensations in my work. Animation medium gives me a very free form of expression, and provides my story and the sense of narration with a great deal of materials. To make this film, I immediately asked myself the question of the incarnation of violence. Krumping or urban dance was an obvious way to express body tension, and that’s why I wanted to use live-action mixed with animation.

What tools did you use to create this animation?

The tools used are quite classic: Photoshop, Dragonframe and Adobe After Effects. I make texturing and patterns on different papers with ink and paint. With my small team, we use the 3D tools (3DS max) and video to create animation references. Then, I edit and record the voices. In the process, I’m trying to work simultaneously on animation, music, sound design, editing and graphic creation, with the goal that every element can influence each other. We approximately worked on it for five to six months. It cost about 80,000 euros (about $95,100).

Why do you think audiences are responding to your short?

We have seen that we are in living in a period of considerable uncertainty: Life is very difficult for the poor, while the wealthiest are always doing well. I don’t know if audiences will like my film. I would like to see Riot act like a manifesto knockout, so that audiences ask questions about violence as well as the power of words and body, about our power to express ourselves.

Who are your favorite animation heroes? What TV shows or movies inspire you?

The film that marked my youth is director Adrian Lyne’s Jacob’s Ladder. Some of my heroes include David Cronenberg, Kim Ki-duk and Lars von Trier. I also love the work of David OReilly and Réka Bucsi in animation and admire the comic-book art of Charles Burns, Daniel Clowes, Adrian Tomine and Joe Daly.

What was the biggest challenge for you as you were making Riot?

The biggest challenge for me was finding the right balance between animation and the live action…I wanted to make Riot as a manifesto, powerful as a piece of rap music with sensitivity in addition.

What do you think of the animation scene in 2017?

I have seen some strong and sensitive shorts: Pépé le Morse by Lucrèce Andreae and the powerful Blind Vaysha directed by Theodore Ushev have made me rejoice.

I am working on an animated film about adolescence titled Anton. I think I will develop my work as a mix of live-action and animation. I also have two short-fiction projects Call Me Yumi and Party Animal. The body will play an important part in them.

What kind of advice can you give up-and-coming animators?

Integrate a team, and collaborate on animation with different workflows. My experience has taught me that to make a film, you must be curious, write and question yourself frequently. Doubting acts as a motor for me!

For more info about Frank and his art collective, visit idealcrash.fr.