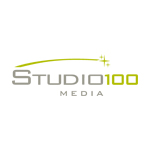 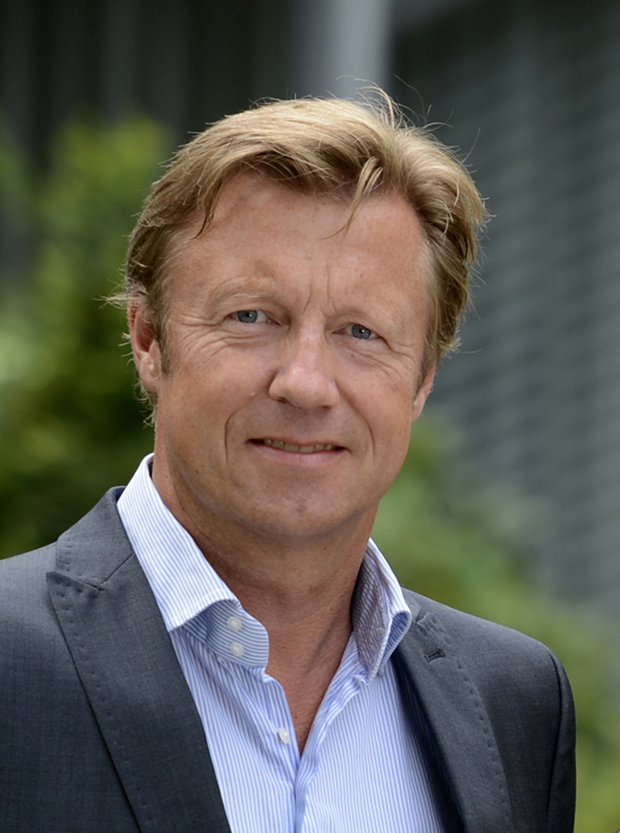 Company statement: We are one family! This year I have the great pleasure to speak on behalf of two companies since Studio 100 Media and m4e are currently in the process of joining their forces in all of their business activities under the roof of the Studio 100 Group and thereby forming one of the largest European kids and family entertainment companies. This is a huge opportunity not only for both companies, but also for our business partners all over the world, since we can offer an even larger portfolio of own and third party brands. Now two perfect strategic partners have been brought together to meet the expectations of a further challenging and increasing international competition. The new constellation will allow the financing and production of many new projects that both companies already have in their pipelines.

I am looking forward to bringing both companies closer to each other and leading them through this process becoming one strong family. Visit us at one of our booths in the Riviera Hall: m4e – R7.H3 or Studio 100 Media – R7.C15. 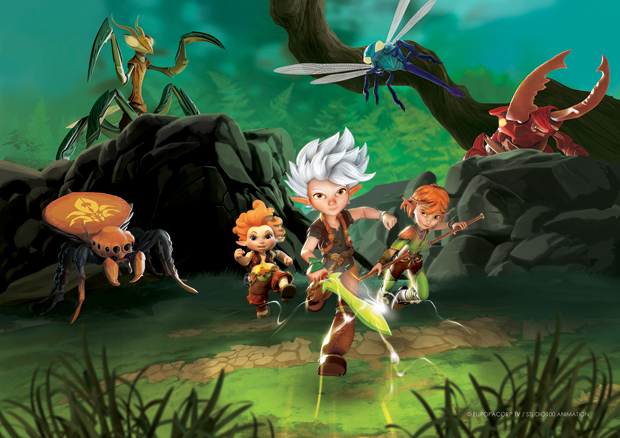 ARTHUR AND THE MINIMOYS – THE SERIES

1. Title: ARTHUR AND THE MINIMOYS – THE SERIES
Production Partners: Europacorp Television, Studio 100, Lagardere Group, Disney Channel Germany
Created By: Based on the books by Luc Besson
Duration: 26 x 26 minutes (18 episodes available December 2017 & all episodes available March 2018)
Target Audience: 5 – 9 year olds
Genre: CGI Animation
Synopsis: Arthur is a bright, ingenious 10-year-old who spends each vacation at his beloved grandmother’s house. And what a vacation! His grandmother’s garden is home to a world that is invisible to the human eye… The world of the Minimoys!

Arthur has discovered the path that enables him to become a Minimoy himself and explore their world. In fact, he becomes the Minimoy who saves these tiny beings from all kinds of dangers: the greatest threat is the invasion by the armies of Maltazard, the Minimoys’ sworn enemy, who rules over the Seides. Arthur the dreamer becomes a hero, leading the population to their liberation with his friends Selenia and Betameche. But with this trio, victory is anything but guaranteed.

Since Arthur’s last visit to the Land of the Minimoys, six of the seven kingdoms have been invaded and occupied by the Seides, the troops of the wicked tyrant Maltazard. They are now known as the Forbidden Lands. The next step for Maltazard is to overrun the Minimoy kingdom and become the absolute master of the seven kingdoms. The King of the Minimoys and his children are organizing their resistance. And ingenious Arthur has arrived to lend them a hand. This is where the series begins and also a whole new set of challenges for Arthur! 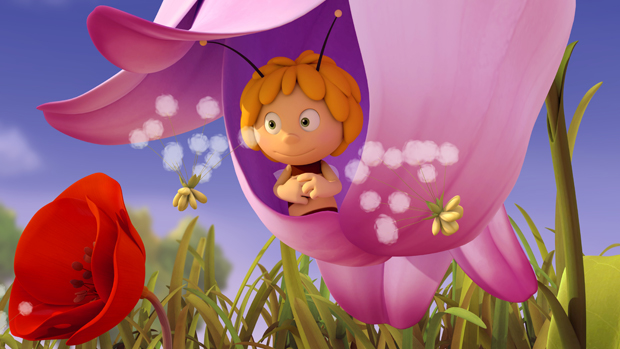 2. Title: MAYA THE BEE – NEW SEASON
Production Partners: Studio 100 Animation, ZDF (Germany), Gulli (France)
Created By: Developed for television by Jan Van Rijsselberge, Delphine Maury and Christophe Erbès
Duration: Season I: 78 x 12 minutes (available); Season II: 52 x 12 minutes (available July 2017)
Target Audience: 4 – 7 year olds
Genre: CGI Animation
Synopsis: Based on the well-known books written by Waldemar Bonsels, Maya is the story of a little bee who is unlike any of the others. The other little bees happily do whatever their teacher Miss Cassandra asks of them. But not Maya! She has left the Thousand Flower Hive to live in the meadow. Her adventures sometimes lead her into trouble, but luckily she has Skip, a kind and friendly grasshopper and Willy, her best friend to help her out.
New: Season II: The brand-new season features 52 new adventures with Maya and her very best friends, including the ants patrol peacekeepers with their star duo, silly Billy Joe & dumb Jimmy Joe. A new guest, Theo, a young bee with a prosthetic wing, is also joining Maya’s adventures. Living outside the hive, Maya is the bridge between the well-organized world of the hive and the free-spirited bugs of the meadow. The very heart of all of Maya’s adventures is experiencing life’s emotions, discovering nature and being friends. 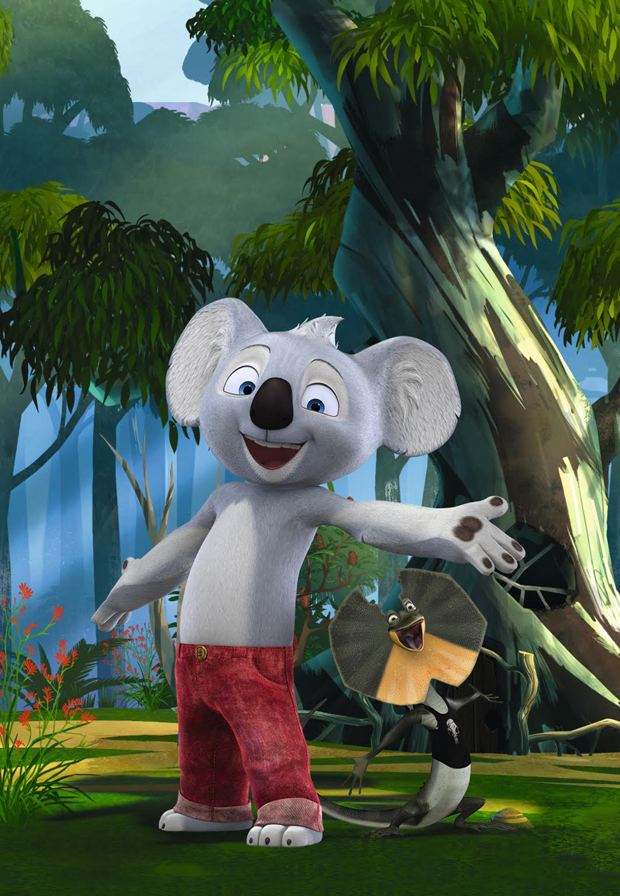 THE WILD ADVENTURES OF BLINKY BILL

3. Title: THE WILD ADVENTURES OF BLINKY BILL
Production Partners: Flying Bark Productions in association with Telegael Teoranta (Ireland), Giant Wheel (India) and KiKA (Germany) as Co-Producer
Created By: Andy Collins, Steve Cooper, Laurent Auclair, Piero Sgro (Based on the original 1930’s book series written by Dorothy Wall)
Duration: 52 x 11 minutes (26 episodes Dec 2016 & 26 episodes June 2017)
Target Audience: 5 – 7 year olds
Genre: CGI Animation
Synopsis: 11-year-old Blinky Bill is stepping up as the ‘Guardian of Greenpatch!’ Armed with cheeky overconfidence and a knack for mischief, Blinky is accompanied by his thrill seeking, highly strung but loyal sidekick, JACKO. Together they take on all challenges and threats to protect the home front and help the citizens of their outback town. Exaggerated in his wild imagination, Blinky can take even the simplest of challenges and turn it into an epic adventure. Whether a mysterious footprint sends him on an animal-seeking safari, or a swooping magpie becomes a medieval dragon from whom only ‘Sir Blinky the Brave’ can protect the good people of Greenpatch, it doesn’t take much for something to spark Blinky’s runaway brain into a full blown fantasy. Together with his friends, Blinky is always in for a wild ride and an outback adventure as the Guardian of Greenpatch! 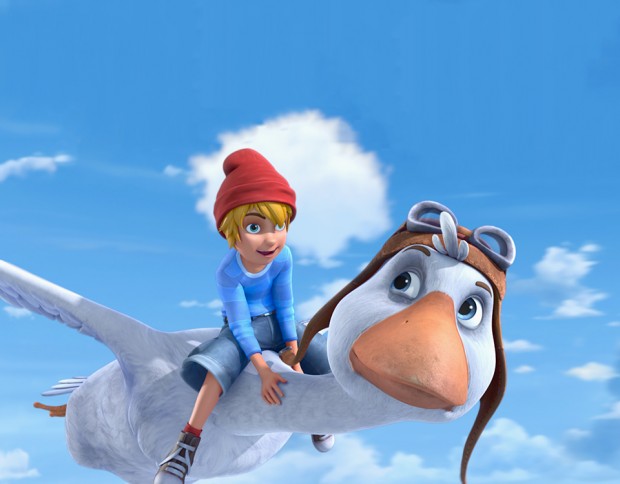 4. Title: NILS HOLGERSSON
Production Partners: Studio 100 Animation together with BR/ARD and AA Studio
Created By: Pierre-Alain Chartier, Jan Van Rijsselberge, Cyril Tysz (based on the novel by Selma Lagerlöf)
Duration: 52 x 13 minutes (26 episodes Dec 2016 & 26 episodes April 2017)
Target Audience: 6 – 11 year olds
Genre: CGI Animation
Synopsis: Reckless and daring Nils is quite a rebel against authority. One day the mischievous elf Athanor transforms Nils into a miniature human. Nils discovers that he can talk to animals and he makes a new friend, Martin the gander. With his faithful friend Martin, Nils embarks on the most extraordinary journey among the wild geese.

Among Akka, the experienced yet somewhat eccentric old leader of the geese, Gorgo the Eagle who believes he is a goose, the charming Soft Feather and her two rival sisters, the maverick boy learns to come to terms with the rules of a community. He finds himself a family. But what were Athanor’s true intentions when he initially transformed Nils? To give the young and inexperienced elf Lina an ally to block the dangerous Dark Elf’s schemes of conquest and to help protect her world and nature itself. 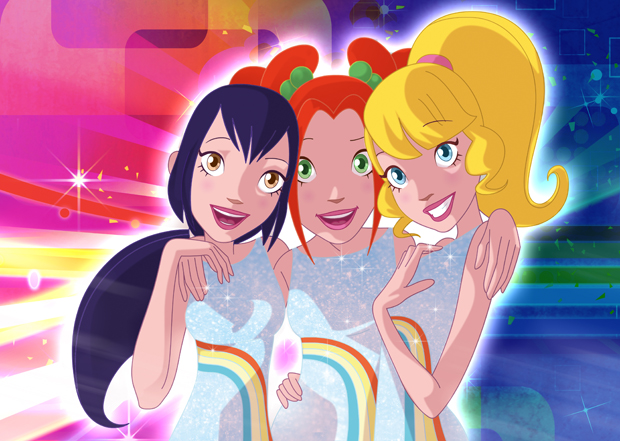 5. Title: K3
Production Partners: Studio 100 Animation SAS
Created By: Eric Cazes, Alan Gilbey, Jan Van Rijsselberge
Duration: 52 x 13 minutes
Target Audience: 4 – 10 year olds
Genre: 2 D Animation
Synopsis: Friends forever, wherever, whatever. Kim, Kylie and Kate are three ordinary girls in an extraordinary world. Teenage pop singers on an amazing global tour full of unexpected diversions, which lead to fun packed stories. Sweet and cheeky, bright and breezy, K3 never know what’s around the next bend in their road and just can’t say no to any adventure. Will they save the orphanage from the property developers, expose the real jewel thieves AND get to their concert on time? Of course! With its bright colours, bouncy tunes and irreverent tone, K3 is a magical musical tour. 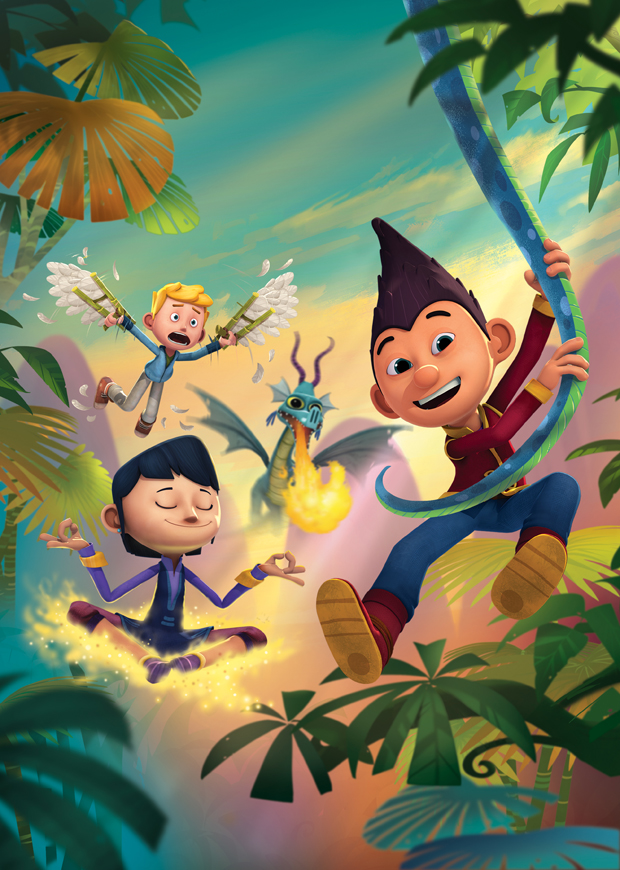 6. Title: TASHI
Production Partners: Flying Bark Productions in association with Discreet Art Productions India and Telegael Teoranta
Created By: Marc Wasik, Noel Cleary Marc, Fin Edquist, Marc Bouyer, Max Loubaresse (Based on the books by Anna & Barbara Fienberg)
Duration: 52 x 11 minutes
Target Audience: 6 – 11 year olds
Genre: CGI Animation
Synopsis: When Jack’s parents bundle him off to stay with his distant cousin Tashi, the two boys get swept up in a series of wild adventures exploring a fantastic land far, far away and protecting Tashi’s village from a host of creatures and villains. In a strange new world, where nothing seems familiar and your logic doesn’t work, how do you survive and thrive? Luckily for city slicker Jack, his new best friend Tashi is the perfect guide through this exotic, upside down, crazy world. And the boys can always depend on warm and whimsical Lotus Blossom to help them navigate any tricky situation! Giants, ghosts, witches, bandits, demons, dragons… Tashi, Jack and Lotus Blossom are ready for anything! 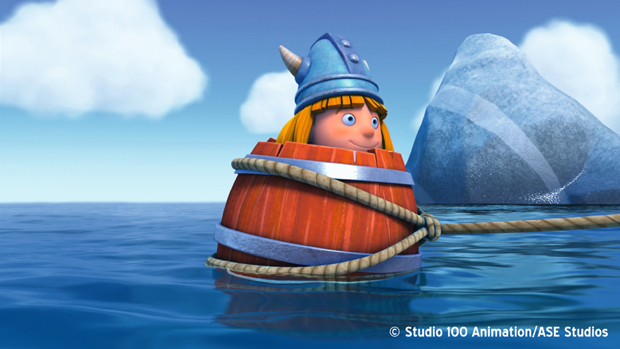 7. Title: VIC THE VIKING
Production Partners: Studio 100 Animation SAS in association with TF1 and ZDF
Created By: Jan Van Rijsselberge, Alexandre Reverend
Duration: 78 x 12 minutes
Target Audience: 5 – 8 year olds
Genre: CGI Animation
Synopsis: Experience the exciting, adventurous, funny and quirky world of Vic the Viking. Vic is a 10-year-old boy who also happens to be the son of Halvar the Viking Chief. As Chief of the Flake tribe living in a small village situated in a Nordic fjord, Halvar tries desperately to teach his son the true Viking way of life. To his amazement Vic shows little enthusiasm for manly and physical activities and although he loves his son dearly, there are times when Halvar is worried Vic simply won’t follow in his footsteps. Together with the rest of the Viking crew, Halvar and Vic get involved in thrilling adventures sailing around the world. Throughout their daily challenges the crew can always count on Vic. He’s simply smarter than the strong, grown-up Vikings and proves that brainpower is the key to untangling the most complicated situations.