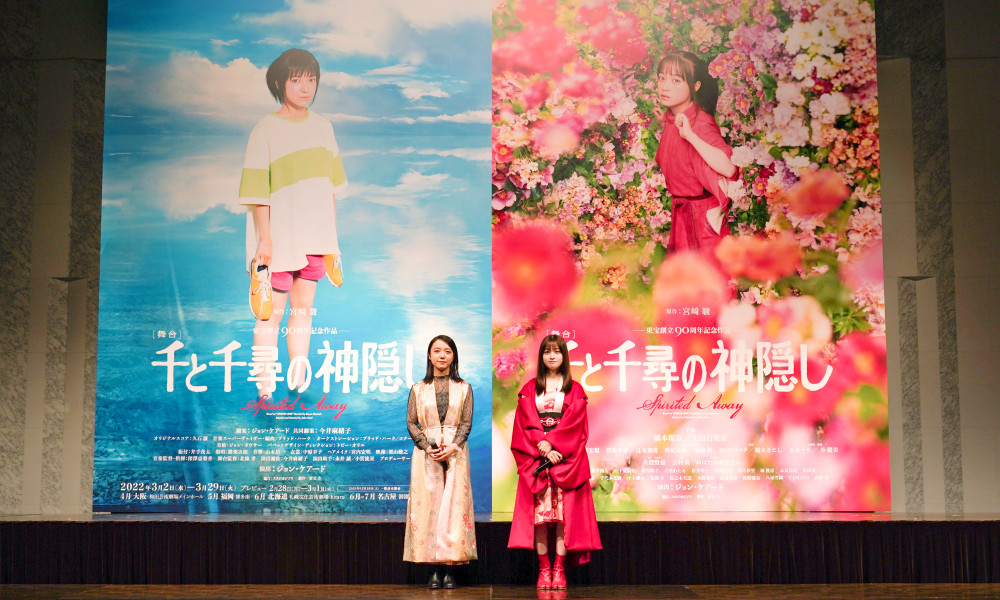 On November 9, Toho Co., Ltd. hosted a press conference in Tokyo, Japan for the upcoming theatrical stage production, Spirited Away (Sen to Chihiro no Kamikakushi), which is set to showcase at the Imperial Theatre in Marunouchi, Tokyo from March 2-29, 2022. The live stage adaptation releases during the year of Toho’s 90th anniversary.

The press conference brought together cast members, including Kanna Hashimoto, Mone Kamishiraishi and Mari Natsuki, along with writer and director John Caird, supporting director Maoko Imai and Studio Ghibli’s Toshio Suzuki, producer of the original film Spirited Away, who each talked about their anticipation for the new stage production. The vibrant energy from the speakers and audience carried throughout the event and built excitement for what’s to come with the stage production.

Opening on an exciting note, the press conference revealed two posters featuring Hashimoto and Kamishiraishi as Chihiro. The surprise reveal served as a first look for the two actors as they saw the posters for the first time, along with the audience who reacted positively to the visuals with a round of applause.

“I can relate myself with Chihiro, who gets lost in the world of gods, because this will be my theater debut and it will be my new adventure to the theater world,” said Hashimoto, who makes her stage debut in the role. “I am hoping to live Chihiro instead of acting as her.”

Double-cast as the lead, Kamishiraishi said, “I was absolutely fascinated by the film when I saw it for the first time at the age of seven, including the scary parts. I am going to convert the pressure I am feeling into energy. I hope I can be as brave as Chihiro.” 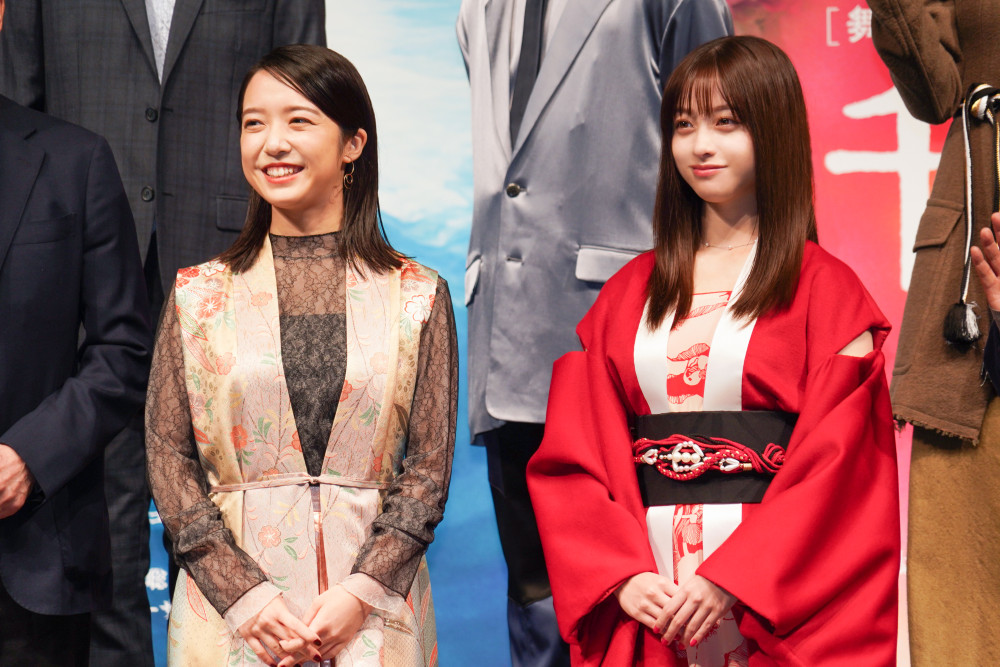 Suzuki said it was “very touching” that the stage adaptation of Studio Ghibli’s classic is happening two decades after the initial release. He also shared an anecdote of Hayao Miyazaki meeting Caird for the first time: “They just clicked right away, and Miyazaki immediately said ‘okay’ to the idea of the stage adaptation.” He also added that it had come from Miyazaki’s thoughts on Spirited Away being “so widely beloved that it has become everyone’s piece, not just his.”

Caird, who is a great admirer of Ghibli films, was surprised at Miyazaki’s prompt decision, even though he believed the story of Spirited Away was very theatrical, and he always felt it could be a stage production. He continued to praise Miyazaki’s stories as having amazing emotional and intellectual integrity and that his talent to get inside the mind of children makes him equal with some of the great storytellers like Charles Dickens, Hans Christian Andersen and Lewis Carroll.

“I think he will go down in history as one of the greatest storytellers,” Caird said. He revealed that Miyazaki had told him to “have fun,” before turning to the lively cast members and adding, “I can guarantee you we’re going to have fun.”

Caird further shared that he has already been working on the play in London and Tokyo through three workshops with the creatives, who include Brad Haak (Knights’ Tale) on music supervision, arrangements and orchestrations; Jon Bausor (London Paralympics Opening Ceremony in 2012) on set design; Toby Olié (puppeteer/associate puppetry director for Olivier Award/Tony Award winning War Horse) on puppetry design and direction; and Shigehiro Ide on choreography.

Another highlight came when Tomohiko Tsujimoto (double-cast as No Face with Koharu Sugawara) performed an improvisational dance as his character, prompting Caird to remark: “I didn’t know how we’re going to [show No Face on stage] until now. Now I know how to do it.” 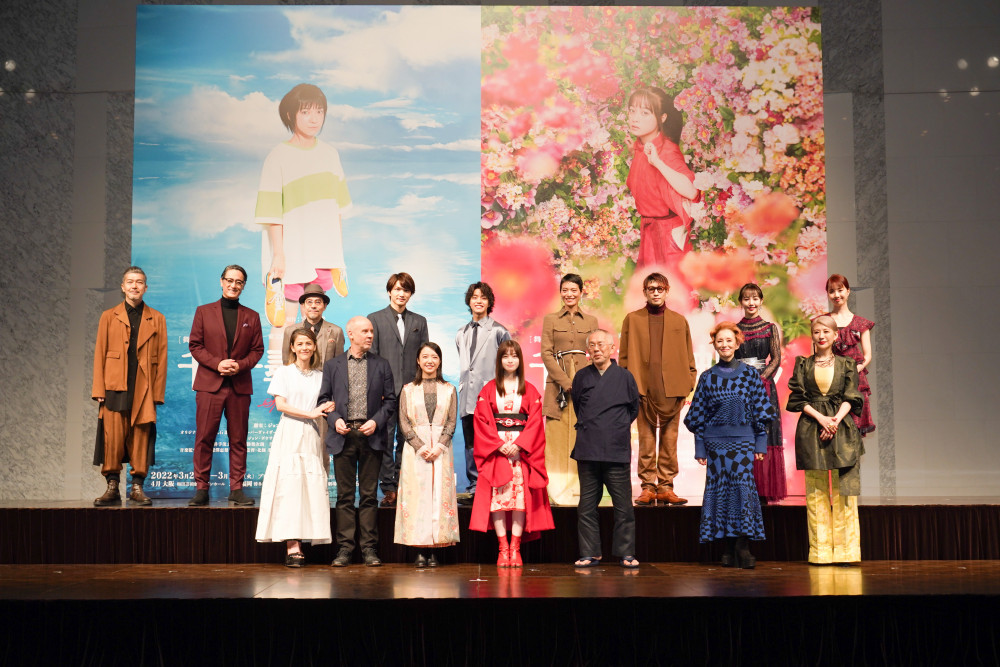 Kotaro Daigo – Haku | “I am nervous, but I am looking forward to working with and learning from everyone.”

Hiroki Miura – Haku | “I am looking forward myself to see how the scene where Haku turns into a dragon will be depicted.”

Koharu Sugawara – No Face | “The story is set in a mysterious world, but there are lives in it. I want to deliver their sparkles.”

Tomohiko Tsujimoto – No Face | “Ghibli films are a part of my life. I am hoping that I can become a part of someone else’s life through this play.”

Miyu Satoshi – Lin/Chihiro’s Mother | “I’ve seen every single Ghibli film. I still feel like I am in a dream. I need to calm down my excitement, but I am looking forward to being a part of the show.”

Fu Hinami – Lin/Chihiro’s Mother | “I am excited that I am going to be working under Ms. Natsuki and Ms. Park and going to take care of Kanna and Mone. I am ready!”

Tomorowo Taguchi – Kamaji | “The historic stage of Imperial Theatre, a masterpiece with fans around the world, and John’s direction — I would like to make the most of this power triangle.”

Satoshi Hashimoto – Kamaji | “John says, ‘let’s play’ to the actors, letting us play around. He is a very proficient director. I hope the audience will enjoy it as much as we do. Please look forward to the number of arms I show on stage.”

Mari Natsuki – Yubaba/Zeniba | “When I voiced for the original film, I thought the role was a villain and I was prepared to act accordingly. But director Miyazaki said, ‘Yubaba is putting all her efforts into protecting the bathhouse. She is not a villain.’ It felt very emotional. I never thought that I would be playing the same role on stage two decades later. Just like Kanna, I would like to play like a debutante and enjoy this stage version as a completely new one.”

Romi Park – Yubaba/Zeniba | “I was given courage to take this role when I was told that I can try out a lot of ways to express, because the play itself shows so many faces. I am going to [take the plunge at the] Imperial Theatre.”

Kenya Osumi – Aniyaku/Chihiro’s Father | “John always treats actors equally regardless of their age or career. I’m honored to be working with him.”