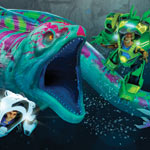 Things are really churning up for undersea animated adventure series The Deep, with announcements of a new agreement to create a 4-D theatrical experience and the appointment of the show’s official master toy partner, just ahead of the show’s season 2 debut on Netflix US, where all 13 episodes launch this Friday, September 22 (season 1 also currently airs on Universal Kids). Alright, let’s dive in…

The property’s underlying rights holder Technicolor has inked an agreement with Oscar-winning big-screen attractions innovator SimEx-Iwerks Entertainment to create a new 4-D theatrical event, The Deep: Mystery of the Ancient Amulet. The 12-minute fully immersive 3-D experience will feature new stereo CG animation, original story and special effects such as vibrating seats, water spray, bubbles and more. The experience will arrive at venues such as zoos, theme parks, aquariums, etc. around the world in Spring 2018.

The story begins when the Nektons — a family of high-tech underwater explorers — get a mysterious amulet from a shady black market dealer, and set out to uncover its secrets. Stolen by The Dark Orca pirates, lost in undersea caverns and finally recovered by the Nektons, the amulet is discovered to have an unbelievable connection to a nearby island. Steven Wendland, VP Animation and Creative Head, Technicolor Creative Development, is the creative lead for Mystery of the Ancient Amulet, serving as director and executive producer. As on the series, Technicolor Animation is providing the animation; Australia’s A Stark Production producing scripts, storyboards and music; and Canada’s DHX Media contributing post-production sound design and sound mix.

Technicolor also announced it has tapped Simba Toys as master toy licensee for the show, in a deal brokered by licensing agency CPLG (a DHX Media company). Simba will initially release a range of figures, playsets and role-play toys and accessories, before expanding into outdoor, die-cast and radio-controlled vehicles and wheeled toys. The first toys will roll-out at retail in Germany, Austria, Switzerland, UK, and Nordic countries in Q3 2018.

“The Deep is a top-rated animated series in several countries already and expanding in others rapidly. We are looking forward to developing this exciting property together with Technicolor into a strong global license by creating an exciting and interactive toy range. The key elements of these undersea adventures such as action, cool vehicles, animals, and good versus evil, fit perfectly for the target group of kids 6-9 years,” added Werner Lenzner, Licensing & Strategic Development Manager of the Simba Dickie Group.

An award-winning series picked up to air in 130 territories, The Deep is based on the Aurealis Award-winning graphic novel series from writer Tom Taylor and illustrator James Brouwer. 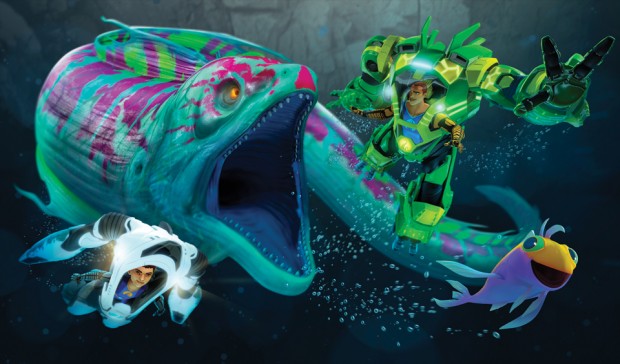