Nickelodeon has greenlit a second 20-episode season of its hit animated preschool series Shimmer and Shine. New season one episodes will continue to air on Nick throughout February and March. The show is currently ranked #1 in its timeslot, and airs regularly weekdays at 11 a.m. ET/PT.

The second season of Shimmer and Shine will follow the titular twin genies-in-training as they explore new vibrant locales in the land of Zahramey Falls with their human best friend Leah and encounter new characters — including power-hungry sorceress Zeta (Lacey Chabert) and her pet dragon Nazboo; the kind genie princess Samira and her beautiful peacock Roya; and Kaz, Zac’s new genie and friend.

Further, the first ever Shimmer and Shine line from Fisher-Price (a subsidiary of Mattel) will debut at this year’s New York Toy Fair. The collection includes basic and deluxe doll assortment and accessories; and feature dolls such as Shimmer and Shine “Wish & Spin” and Shimmer and Shine “Magic Flying Carpet.” The line will rollout to retailers nationwide in July. 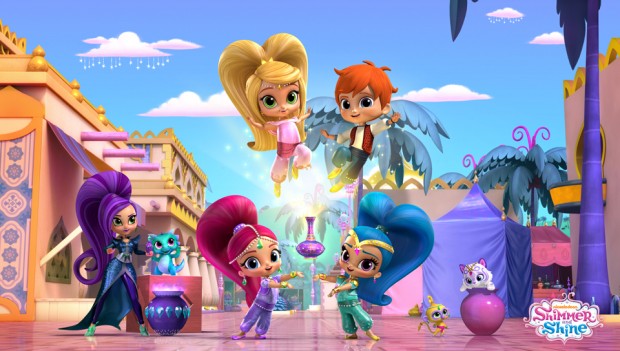