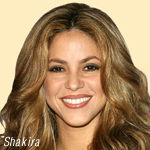 The book, published by Simon & Shuster and titled Dora the Explorer in World School Day Adventure, is the first jacketed-hardcover storybook featuring the star of the popular Nickelodeon preschooler series. The story follows Dora, her friend Boots and Shakira herself as they celebrate World School Day with students all over the world.

“I’m a big fan of Dora because she inspires kids all over the world,” said Shakira, winner of two Grammy Awards and seven Latin Grammy Awards. “It was such an honor working with Nickelodeon to write this story with its message of helping others and education, which is very close to my heart.”

Available in English and Spanish versions, Dora the Explorer in World School Day Adventure goes on sale this week at major retailers and is priced at $16.99. A portion of the book’s proceeds will benefit The Barefoot Foundation, Shakira’s nonprofit organization dedicated to childhood education.

You may also like...
Related Topics:Anniversary, Book, Celebrate, Dora, Shakira