9 Story Entertainment and Scholastic have announced the signing of a publishing deal for the hit kids’ animated comedy series Almost Naked Animals. The deal was brokered by The Licensing Shop and will see Scholastic publish comic readers, joke books, chapter books, e-books and digital interactive story books featuring the quirky characters and their hilarious escapades for the U.S., Canada and Mexico in English and Spanish. The English language chapter and joke book will launch this month in North America.

The show, based on designs by Noah Z. Jones, is an irreverent 2D romp featuring an odd assortment of free-spirited animals clad in underwear who run a beach-front hotel. Almost Naked Animals is seen in the U.S. on Cartoon Network and in Canada on YTV and VRAK, in addition to airing on leading international children’s channels around the world. Almost Naked Animals’ robust licensing program includes home entertainment, toys and apparel, an online super game, an e-commerce store in addition to social networking partnerships. 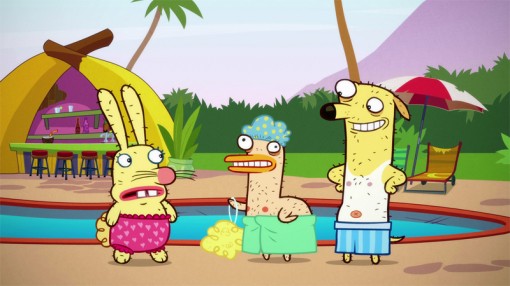 Bitfilm Launches in Bangalore
Oscar-Nominated Shorts to Debut in Theaters on Feb. 1