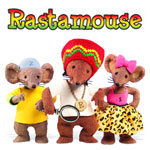 Rastamouse, the super cool preschool sensation from DHX Media is having quite a big season. Activity for Q3 of 2012 includes the launch of a summer single, a CBeebies radio show and several high-profile live appearances. Da Easy Crew have also signed their second album deal with EMI, and as a perfect accompaniment to the summer season, DHX Media has scored a deal for foil balloons with AMSCAN.

The new music single Run Wid’ Me (featuring Bagga T and Missy D) has been launched by EMI and is now available for download on iTunes. Following the success of their previous musical releases, Rastamouse and Da Easy Crew will also be heading to the studio to record a host of brand new tunes for their second album following a deal with EMI.

Rastamouse has this to say about his latest endeavor:

“We had a blast puttin’ togedda dem songs fe dat first album an’ our fans dem been givin’ us some amazin’ feedback!  Mi bare excited dat mi friends at EMI want to hear plenty more choons an’ it gonna be a lot ah fun gettin’ into da groove.  If ya wonderin’ if it gonna be a difficult second album, mi can tell ya fi sure dat dere’s already some bangn’ riddims echoin’ round Nuff Song Studio.”

As well as a host of UK-wide character appearances, the reggae-loving trio will be performing at CBeebies music event on 12th August, part of a series of live events for all audiences this August at MediaCityUK in Salford Quays. Rastamouse and Da Easy Crew will be performing at BT London Live Victoria Park on 29 July 2012 at 3pm (timings and information subject to change without notice). BT London Live is a series of free events presented by the Mayor of London, The Royal Parks and the London Borough of Tower Hamlets to celebrate London 2012. To find out more information, visit: www.btlondonlive.com.

In keeping with the party vibe, DHX Media has also signed a deal for foil balloons with Amscan International, the market leaders for party balloons. 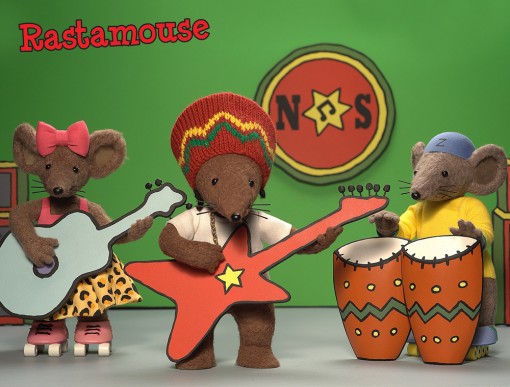 Stop-frame animated series Rastamouse, produced and animated in the UK by Three Stones Media, is set for a second season on CBeebies with new episodes to air next month. Based on the books by Genevieve Webster and Michael De Souza, Rastamouse launched on CBeebies in January 2011 and has since engaged a following of preschoolers and parents alike.  The series features Rastamouse, Scratchy and Zoomer of Da Easy Crew, the mystery-solving, reggae-playing band who always make a bad ting good and live by their motto “redemption, not retribution.”

Visit www.rastamouse.com for more news on this super cool rodent and his pals.