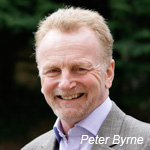 CPLG has a renowned reputation in the licensing business, managing the licensing and merchandising rights for some of the leading entertainment, sports and consumer goods brands, including clients such as 20th Century Fox, Activision, DreamWorks Animation, Saban Brands, St Andrews Links and the RFU.

“CPLG has such an incredible pedigree and is a company I have greatly admired and worked alongside for many years, so I am really excited to be leading the company through its next phase of growth,” says Byrne.

Byrne  joins CPLG with a wealth of industry experience in worldwide consumer products, having held many senior roles during his career including EVP Consumer Products at HIT Entertainment, EVP Worldwide Licensing and Merchandising at 20th Century Fox, VP Northern Europe for Sara Lee Branded Apparel and General Manager for Fruit of the Loom. Most recently Peter ran his own global licensing consultancy working with clients such as Guinness World Records, Aardman Animations and Al Jazeera Children’s Channel.

“CPLG is an integral part of the DHX Media vision and we are delighted to have secured someone of Peter’s caliber to gear up for profitable growth both in Europe and beyond,” says Michael Donovan, CEO of DHX Media.