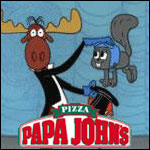 “Hey, Rocky, watch me pull a pizza out of my hat!” Not even Boris and Natasha could spoil the joy of eating pizza and watching cartoons. That’s why piemaker Papa John’s has added a new animated DVD to its pizza and entertainment campaign. To accompany July’s special, the barbeque chicken and bacon pizza, the delivery chain is adding a little moose and squirrel on the side.

Customers purchasing the July special, or any other large Papa John’s pizza at regular menu price from participating restaurants, will receive their choice of one of the four featured DVDs, including The Best of Rocky & Bullwinkle and Friends. The other entertainment options are the Jr. Scene It? game and the films Durango Kids (2003) and Weekend at Bernie’s II (1993).