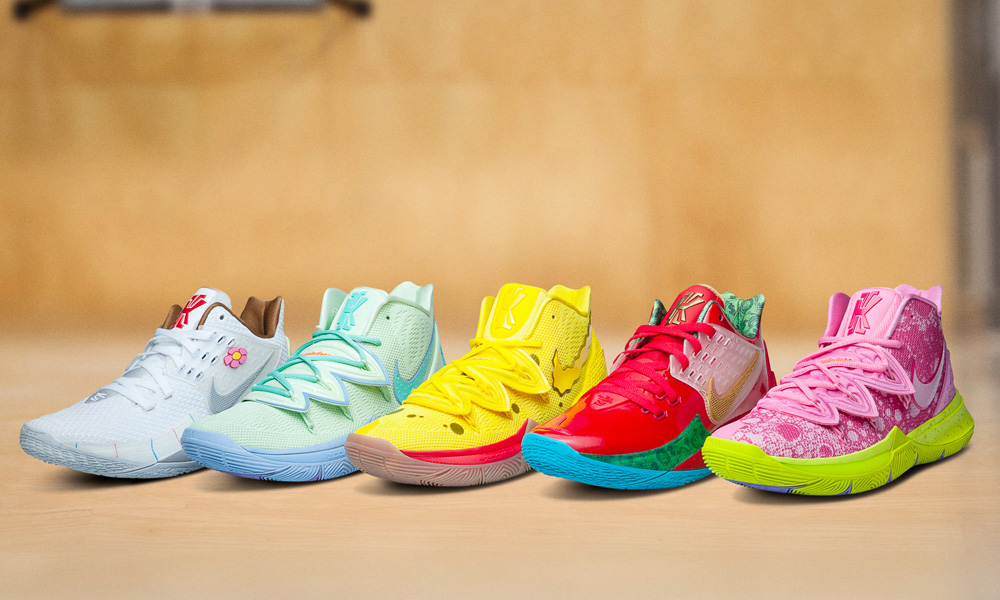 Nike and Viacom Nickelodeon Consumer Products (VNCP) have announced the launch of the Kyrie x SpongeBob SquarePants collection. The collection features five shoes inspired by the signature characters from SpongeBob SquarePants, as well as apparel and accessories, including t-shirts, a hoodie, socks and backpacks. The crossover is the latest part of the show’s 20th anniversary celebration to kick off this year.

Basketball superstar Kyrie Irving’s latest collection is suited for on-court competition and off-court jellyfishing with dedicated colorways for favorite characters. The three high-top sneakers in the collection showcase the signature Kyrie 5 silhouette in bright yellow for SpongeBob, pink and green tones for Patrick and turquoise accents for Squidward. The low-cut silhouette of the Kyrie Low 2 pays homage to the currency-crazy crustacean, Mr. Krabs, as well as a Sandy Cheeks version with colors inspired by her iconic space suit.

“What makes our collaboration with Kyrie and Nike so special is that we are celebrating SpongeBob’s 20th Anniversary with one of SpongeBob’s biggest genuine fans,” said Jose Castro, Senior Vice President and Head of Global Collaborations, VNCP. “Everything from the characters Kyrie chose and how they were designed into the line was done from a true fan’s perspective, and it shows. The sneakers, clothes and accessories became extensions of SpongeBob’s world, and we know fans everywhere will love this collection, just as much as we loved creating it with Kyrie.”

Kyrie x SpongeBob SquarePants will be available in adult and kids sizes from August 10 on Nike.com and in-store. In Europe, the collection will also be available at Kickz stores