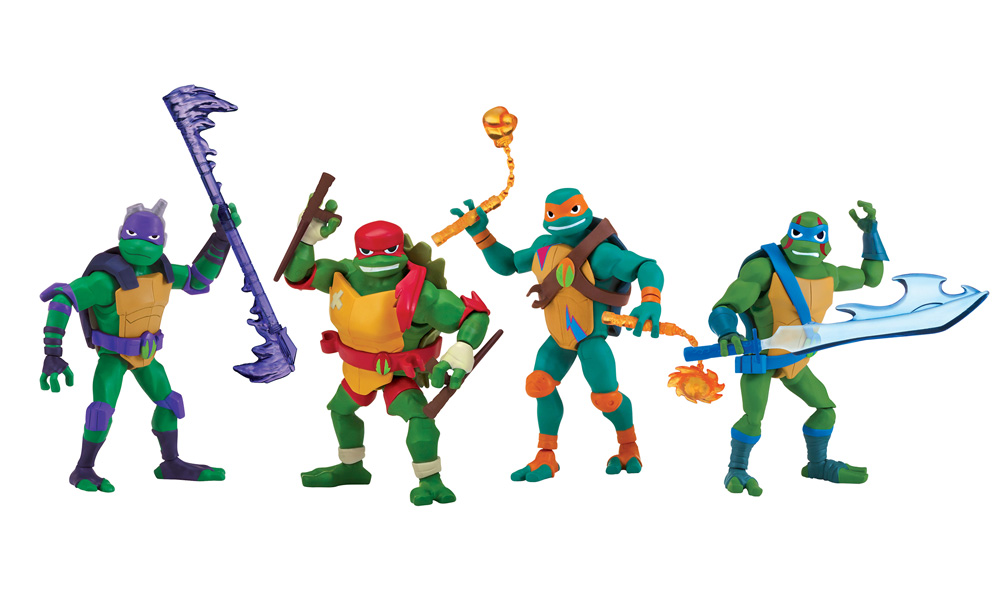 The freshly redesigned heroes on a half-shell of Nickelodeon’s Rise of the Teenage Mutant Ninja Turtles (premiered Sept. 17!) are taking their cool new looks to market, with Playmates Toys announcing the release of its new line at major retailers starting October 1.

As the longtime master toy licensee for Teenage Mutant Ninja Turtles, Playmates Toys developed this all-new product line based on the reimagined toon. The toy line includes an assortment of highly detailed action figures, as well as vehicles, a playset and role play toys.

In addition to the new goodies, Playmates Toys is also introducing a Sewer Squad Pizza Points Loyalty Program, where fans can collect and redeem pizza points for exclusive toys and more. A unique, secret code is included in every Rise of the Teenage Mutant Ninja Turtles toy package from Playmates Toys. Fans can visit playmatestoys.com to register and join the Sewer Squad, in order to qualify for exclusive toys and other rewards.

“We carefully developed the new toy line with unique sculpting and incredible detail, in order to closely resemble the dynamic look of the Turtles in the new series,” said Karl Aaronian, Senior Vice President of Marketing, Playmates Toys. “With Teenage Mutant Ninja Turtles being an enduring, iconic franchise, we are also delighted to bring back the Pizza Points Loyalty Program, which first debuted in the late 1980s, in an exciting new way for today’s generation of kids to enjoy.”

“The Teenage Mutant Ninja Turtles is a property that has reinvention in its DNA and Playmates has been there every step of the way,” said Jon Roman, Senior Vice President, Toys, Nickelodeon. “Show creators for the new Rise of the Teenage Mutant Ninja Turtles, Ant Ward and Andy Suriano, worked hand in hand with Playmates to ensure that the bold, colorful design of the show translated into product at retail and we can’t wait to introduce them to a new generation of fans.”

Highlights of the new line include: