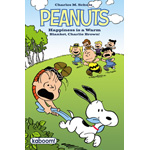 We’ve already told you about Happiness is a Warm Blanket, Charlie Brown, the new Peanuts animated special. Now the special is getting Peanuts back into comics form with a graphic novel adaptation from kaboom!, a new kids comics line from Boom! Studios.

The graphic novel will be an 80-page, hardcover edition written by original Peanuts creator Charles M. Schulz and adapted by Craig Schulz and Stephan Pastis, with art by Bob Scott, Vicki Scott and Ron Zorman. The book goes on sale in March for $19.99. The animated version arrives on home video March 29.

“We’re honored to publish such a beloved property,” said Ross Richie, founder and CEO of BOOM! Studios. “I can think of no better way to kick-off our new all-ages imprint kaboom! than with the first Peanuts graphic novel ever published.”