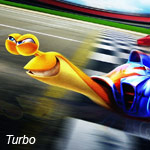 IndyCar, the sanctioning body for the IZOD IndyCar Series and Firestone Indy Lights, and the Indianapolis Motor Speedway, has announced a movie-themed collaboration with DreamWorks Animation for its upcoming animated feature film Turbo.

Turbo is described as being the story of an ordinary garden snail who gains extraordinary speed through a freak accident, giving him a shot at fulfilling his lifelong dream of winning the Indy 500.

“The Indianapolis 500 is a one-of-a-kind live event that has fascinated people of all ages for many, many years and Turbo is a character whose biggest ambition is to add his name to its list of international champions,” said Jeffrey Katzenberg, CEO of DreamWorks Animation, in a press release. “DreamWorks Animation’s alliance with the IndyCar team represents an authentic tie-in between a real-life race and an imagined adventure that is certain to culminate in a thrilling ride for the whole family next summer.”

“Today is a very exciting day for us, as we announce our collaboration with the DreamWorks Animation team on Turbo,” said Randy Bernard, CEO of IndyCar, also in a release. “We’re very honored to work with Jeffrey, his team and the incredible star power of the cast to bring the Indy 500 to the world in such a unique and engaging format. We believe new and existing fans of all ages will be captivated by the animated depiction of Indianapolis Motor Speedway as well as the wonderful characters that inhabit the universe of DreamWorks Animation’s Turbo.”

The deal is part of a larger entertainment strategy for IndyCar, which is also has cut deals to tap into home entertainment and sports video arenas.