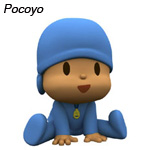 The popular animated series Pocoyo has a new master toy distributor in Italy.

Giochi Preziosi will release an extensive range of Pocoyo-branded products starting in the spring, including plushes, figurines, vehicles and activity toys.

Since airing on Italian state broadcaster RAI 2 from March 2010, and kids’ channel RAI Yoyo since 2007, Pocoyo (104 x 7 minutes) has taken Italy by storm. The series, co-produced by Zinkia and ITV Studios Global Entertainment, reached a 26% share on RAI 2 and an 18% share on RAI Yoyo.

Rai Trade, which specialises in managing licensee agreements in Italy is currently closing a number of deals in order to establish a nationwide network of agents.

Fernando de Miguel, Managing Director and CEO of Madrid-based Zinkia said, ‘This is an important deal which gives Pocoyo strong brand visibility in the Italian market. If figures are similar to the success we’ve enjoyed in Spain, we could be selling over 2.5 million toys in Italy and achieving strong commercial growth.’

Worldwide distribution rights for Pocoyo in Italy, Spain, Portugal and Latin America are handled by Zinkia, with rights for the rest of the world handled by ITV Studios Global Entertainment.