Cartoon Network stepped into the Unknown with its first original animated miniseries Over the Garden Wall last year, and now fans will be able to take home Adventure Time vet Patrick McHale’s mystical tale with a DVD well stocked with bonus features, a comic-book series from KaBoom! and a special “For Sara” cassette from Mondo.

The Emmy-nominated series follows brothers Wirt (voiced by Elijah Wood) and Greg (voiced by Collin Dean) who find themselves lost in the Unknown — a strange forest adrift in time. With the help of the wise Woodsman (Christopher Lloyd) and a temperamental bluebird named Beatrice (Melanie Lynskey), Wirt and Greg must travel across the strange land in hopes of finding their way home.

KaBOOM!, an award-winning imprint of BOOM! Studios, is releasing a four-issue limited Over the Garden Wall comic-book series from McHale and Jim Campbell, which serves as a follow-up to the one-shot that immediately sold out last fall. Issue #1is a new story set between episodes 3 and 4 of the show. In it, Wirt and Greg are trying to hitch a ride out of Schooltown, but end up having to walk. They come upon two girls playing, and end up having to keep them entertained so they don’t wake their giant father. Issue #2 is set between episodes 4 and 5, iss. #3 is between episodes 5 and 6, and iss. #4 serves as a prequel to the entire story.

Over the Garden Wall #1 arrives in comic stores Aug. 26 with a main cover by Jim Campbell, for $3.99 under Diamond order code JUN151090. Also available in a limited quantity is a subscription variant by Adventure Time storyboard artist Steve Wolfhard, a 10 Years incentive cover by Jeffrey Brown (Star Wars: Jedi Academy) and a retailer incentive cover by Michael DiMotta. Subsequent issues arrive monthly until #4 in November.

Fans of the show are familiar with the “For Sara” cassette; Wirt’s analog love letter to his crush in the form of a heartfelt mix of poetry and clarinet. Now, they can experience it as it was meant to be heard with an actual tape created by Mondo in partnership with Cartoon Network. The “For Sara” Cassette (available in September on mondotees.com) is a limited-edition release featuring over 20 minutes of all-new material, produced and performed by series composers The Blasting Company and featuring the voice of Elijah Wood. 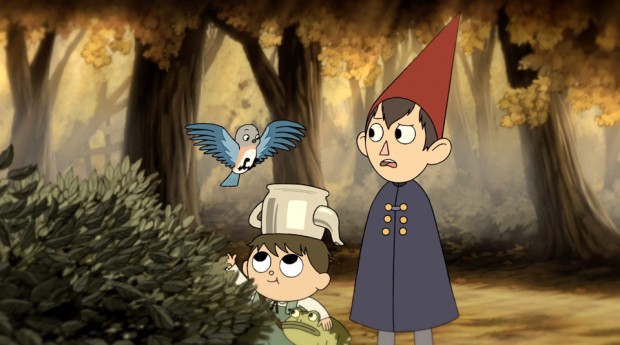